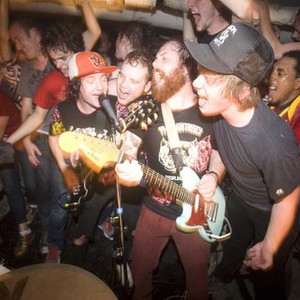 The Death Set (also spelled TheDeathSet or The DeathSet) is a music group formed in 2005 in Sydney, Australia by Johnny Siera and Beau Velasco. Six months after its inception the band moved to the East Coast of the United States, spending most of its time in Brooklyn, Baltimore and Philadelphia where the band found an audience for its style of spastic, cross genre punk rock. All members currently live in Brooklyn, where the band is based.

The band fuses punk rock sound and energy, electronic music production and hip hop sampling into their recordings. Their live shows are high energy events often played at crowd level with the audience surrounding the band.

In January 2008, the band signed to Counter Records, the rock offshoot of the U.K. label Ninja Tune. The subsequent full length album Worldwide was released on July 4, 2008 to positive reviews.

On 27 September 2009, Death Set guitarist and co-founder Beau Velasco was found dead in his New York City studio. The band decided that they would continue after his death and released the album Michel Poiccard on 15 March 2011.

We Are Going Anywhere Man (CDS)

Can You Seen Straight? (MCD)