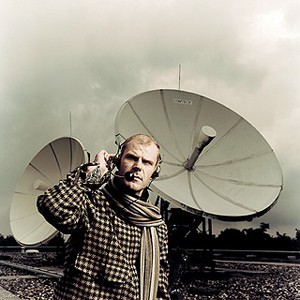 Junkie XL (also known as JXL) is musician Tom Holkenborg, born in Lichtenvoorde, The Netherlands on 8 December 1967. After producing and touring with the Dutch group Weekend at Waikiki, together with Phil Mills he founded the industrial band Nerve and released 2 albums (1993 and 1995). After he and Chris Hinze under name A Forest Called Mulu recorded trip-hop/ambient album and began writing his own tracks as Junkie XL in 1997. He has worked with many electronic music artists, including Sander Kleinenberg, DJ Ti&euml;sto and Sasha.

In 2002 he left The Netherlands to live and work in the United States where he works on soundtracks for movies and computer games.

He uses the name "JXL" in those cases where the term Junkie might cause offense.

Some of his better-known songs include:

He has produced a remixed version of The Sims theme music for the computer game The Sims 2: Nightlife as well as the entire soundtrack for the Xbox racing game Forza Motorsport. He has also provided music for the films Kingdom of Heaven, Domino and DOA: Dead or Alive. His song Today was featured as one of Burnout Legends' EA Trax, apparently before the album was released. He has also produced a remix of the Destroy All Humans! theme which can be heard on the credits or on the soundtrack.

There are also 2 remixes by Junkie XL on the Need for Speed: Carbon soundtrack. He composed the entire SSX: Blur soundtrack.

While JXL is considered to be an electronic music artist, he is surprisingly connected to the heavy metal culture: apart from providing remixes to both Fear Factory and Rammstein, he is signed to metal-label Roadrunner Records and has appeared on Roadrunner United.

Booming Back At You