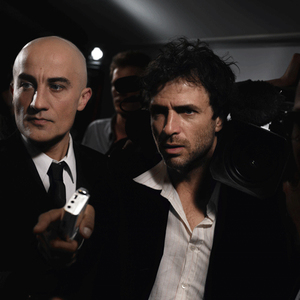 There are 2 bands with the name Cassius. (1) For anyone who was 20 years old in the ?90s, the decade will remain the one in which a handful of French pop artists set themselves apart on the market and international dance floors. These successes might have been isolated, but the French DJs and electronic artists of the ?90s - like Daft Punk and Cassius - were part of a collective wave that stamped the covers of newspapers and magazines around the world with that ?French touch.?

(1) For anyone who was 20 years old in the ?90s, the decade will remain the one in which a handful of French pop artists set themselves apart on the market and international dance floors. These successes might have been isolated, but the French DJs and electronic artists of the ?90s - like Daft Punk and Cassius - were part of a collective wave that stamped the covers of newspapers and magazines around the world with that ?French touch.?


Cassius is a French electronic music duo comprising of producers Phillipe Cerboneschi and Hubert Blanc-Francard, better known as Philippe Zdar and Boom Bass. They started working together in 1994, producing a hip-hop project called La Funk Mob. They started remixing tracks under the Cassius name in 1997, for acts such as Air and Daft Punk, before producing their own original works.

As hard rock and funk fans, Zdar (Philippe) and Boom-Bass (Hubert) first made their mark producing and engineering the sound sought by hip-hop artists - their great passion of the early ?90s. But the raves Zdar attended converted him to house music and, with Etienne de Cr?cy, he founded Motorbass. British media opinion surveys chose Motorbass's ?Pansoul? as one of the year's best albums, all styles combined.

BoomBass was soon infected by the techno speed-up, and hooked up with Zdar for a new project, called Cassius. The duo's first album, 1999, is a collection of instrumental tracks recorded over the two previous years. It pulses with impact and style and reconnects with the black roots of house and techno music, while evoking the heart-pounding funk of a Prince.

Their first single was Foxxy, a self-published track, in 1996. In January 1999, they released their first hit single Cassius 1999 on Virgin Records, entering the UK Top 40 chart at number seven. This was soon followed by their debut album, 1999, which had two more single released from it, Feeling for You and La Mouche.

Au R?ve, which followed three years later, is the duo's confession, an effort to build a ?musical monument.? It was ?a utopia, into which we put a lot of time and resources - maybe too much," say the duo today.
As if reacting to that ?superproduction? - which didn't earn unanimous approval just as the French house music scene was disintegrating into a series of new cliques - Zdar and Boombass each went back home to compose solo projects. But it soon became obvious that the sum of the parts each had composed could provide the material for a new duo album. To retain the songs' freshness and spontaneity, Zdar and Boombass established rules worthy of a Lars Von Trier Dogma production: exile to a house in Ibiza with scaled-back technology and a firm eight-hour time limit for each piece to help keep them focused on essentials.

2002 saw their second album release, Au Reve. This featured the "empowered female disco" track I'm a Woman, with Jocelyn Brown on vocals, as well as the hit single The Sound of Violence, featuring Steve Edwards on vocals. This album also had collaborations with Wu-Tang Clan member Ghostface Killah and Leroy Burgess.

in 2006 they released their new single, "Toop Toop" followed by the album "15 Again" on the 11th September, recorded during a three week period in Ibiza.

After the luxury of Au R?ve, returning to the home studio lifted the two musicians' morale, as revealed by 15 Again. This new album, with its near-manifesto of a title, is in sync with the homemade, garage sensibility of today's youth.

Fans from every corner of dance culture won't be disappointed. Infused with a rave edge, Toop Toop starts things off with a Popcorn-like sequence, a Clash-style guitar riff and Zdar's voice, shouting into a megaphone. Three tracks have a more definite electro edge. The title song, 15 Again, features acid house sequences, sung as a duet with Gladys. Cactus takes us back, rendering homage to Soulsonic Force. The strange poetry of Cria Cuervos offers an electro-ambient counterpoint.

But the Ibiza influence demands a splash of reggae-funk colour. See Me Now, suggests Gil Scott Heron as he might sound with Alec Sadkin as producer - it's unquestionably African and jazz, but in a slimmed-down version, with the pop-flavoured All I Want.

Even more personal and bold, behind the wacky sound aesthetic (a cousin to the Stones), the other half of the album shows tremendous skill in the way the compositions are introduced, developed, relaunched and ended, and features the duo's musician friends - Mathieu Chedid on a couple of guitar riffs, the singer, Gladys on certain tracks, S?bastien Tellier on bass and Pharell Williams. Williams was seduced by the instrumental, Eye Water, the opening track of the Au R?ve album. The famous hip-hop artist/producer wanted to write lyrics so that a sung version could be recorded. Propelled by the hard guitar sound of the ?80s and vintage synthesizer bars, the song takes on an epic dimension, in tune with the crypto-ecological text that evokes Marvin Gaye's peaceful soul protest music.

The influence of the Neptunes' founder can also be heard on Rock Number One. Its couplets recall Chaka Khan's electro-jazz period, and the refrains suggest Britney Spears produced by Outkast. Weed smokers will savour the drums in the savannah and the synthetic crickets of A Mile From Here, with its irresistible electro caravan rhythm. Finally, the entire pop planet is called to arms for The Song. Together, the falsetto voices, synthesizers ? la Prince swinging to a cold wave beat, rhythmic accidents, tonality diffractions and abrasive and rubbery resonances, deliver a powerful hit, a freaked-out classic, ironic and jubilant.

Mixing had barely finished in Paris - this time, limited to six hours per song - when Zdar and Boombass began auditioning musicians so that this new repertoire could get out on tour as soon as possible. And also to prove that, whether holding a guitar or at the keyboard, after 15 years behind consoles and turntables, that they really are ?15 years old - again.?

CASSIUS.fm Offical SITE
Fan site
MySpace (as both sites above are dead)


(2)Cassius formed in the winter of 2003 in Richmond, Virginia. Drawing members from previous local bands, the band began writing new material and playing regional shows. After many setbacks and line up changes, Cassius decided it was time to buckle down and get serious. After recording their debut full length I Am Jim Jones with Chris Dowhan from Red Planet Studios (Scarlet / Twelve Tribes / Black Dahlia Murder), Cassius cancelled the lease on their apartment, bought a van and trailer and began booking whatever tours they could. Hard work and strong friendships brought them to their current position and with focus and determination, Cassius are hell bent on making themselves a house hold name within the metal and hardcore community. Despite not having a record to tour on previously, Cassius has already completed successful tours with bands like Ed Gein, Misery Signals, Ion Dissonance, Through The Eyes Of The Dead, and Despised Icon to name a few.
They signed to Lifeforce Records, and released I Am Jim Jones in January 2007.

Feeling For You (CDS)

Feeling For You remix