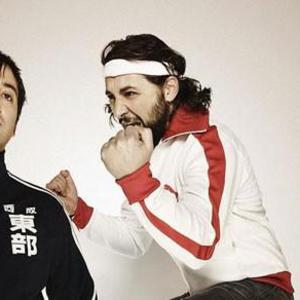 Iranian-American dance music production duo based out of Washington D.C., USA, consisting of Ali "Dubfire" Shirazinia and Sharam Tayebi. Originally known as club DJs, they have also released a long library of remixes and original productions. They own and operate the Yoshitoshi record label and have worked extensively with vocalist Morel. Their remix of Dido's "Thank You" won them a Grammy Award.

The Iranian/American singer of three songs (Say Hello, Flashdance, Awake Enough) on the album George is on, is Anousheh Khalili.

Each year, an album is released that demands a place in any music fan's CD collection. Washington, DC- based Grammy Award winning duo Deep Dish's latest effort George Is On, is one such record. For those tired of the same old formula in either rock, dance or beyond, this is the album that will break down doors and force you to look at music from a different perspective. Fresh off 2004's international hit lead single "Flashdance," and a follow-up single, "Say Hello," that's currently tipped for a repeat performance, the duo of Ali "Dubfire" Shirazinia and Sharam Tayebi have delivered an album that could prove to be the defining work of their careers.

George Is On exemplifies Deep Dish's uncanny ability to mix genres, as the Iranian-American duo brilliantly marries classic 70's/80's era rock & pop sounds with their signature deep and sexy dancefloor production and knack for creating subtly big songs. The record features a tight knit group of DC-bred guest vocalists, including long time Deep Dish collaborator Richard Morel on "No Stopping For Nicotine," "Sacramento," and "Everybody's Wearing My Head" and newly discovered female vocalist Anousheh on "Flashdance," "Say Hello," and "Awake Enough." Dubfire himself also debuts his vocal talents on the melancholic yet beautiful ballad "In Love With A Friend."

"Flashdance," was the first new release by the duo in six years as well as being the debut single from George Is On. With vocalist Anousheh's sultry, nonchalant vocals accompanied by a slick guitar riff inspired by a song from the 80's cult classic film "Flashdance," the song quickly grew into an international crossover phenomenon that would come to define the "guitar-house" sound. After conquering dancefloors worldwide on promo over the spring of 2004, the song debuted in the USA in late summer of 2004 and went on to become the No. 1 top-selling dance track on Apple's I-Tunes for the year. In September of 2004, the single debuted at the No. 3 spot on the U.K.?s pop charts. "Flashdance" went on to be released in over 30 territories, went Gold in Australia, and won the duo the award for "Best Underground Dance Track" at this year's International Dance Music Awards in Miami. In helping to continue the "Flashdance" phenomenon, Canadian producer Sultan went on to update the song with his bombastic mash-up remix that seamlessly crosses the Deep Dish original with Dire Straits' guitar rock classic "Money For Nothing." In what is one of the world?s first ever legally cleared "mash up" remixes, this instant classic has been included on the US version of the album as a special bonus track.

Deep Dish goes on to further bridge the gap between past and present via their re-work Fleetwood Mac's seminal "Dreams" (the third single). And in a major coup for the album, the song features newly recorded vocals from Steve Nicks herself! The song was originally set to be an instrumental, however the duo soon noticed that the vocals for "Dreams" were in near perfect key with their instrumental track. The duo sent the song to Stevie Nicks' camp to see if there was any interest and, lo and behold, Dubfire and Sharam soon after found themselves at the legendary Village Studios in West LA (coincidentally, a studio where Fleetwood Mac had once recorded) laying down the new vocals with the legendary Fleetwood Mac vocalist.

It's been 14 years since the duo first met in DC, and it's been seven years since they released their critically acclaimed debut artist album Junk Science. During the time between Junk Science and George Is On, Deep Dish's Dubfire and Sharam have been extremely prolific. They've released a number of genre-defining mixed CDs including Yoshiesque (1999), Renaissance Ibiza (2000), Yoshiesque Two (2001), Deep Dish "Global Underground: Moscow (2001) and Global Underground: Toronto (2003). In addition, they have become two of the most in demand remixers in the business, and their credits include Madonna, Beth Orton, Depeche Mode, Dido, Janet Jackson, The Rolling Stones, 'N Sync, Justin Timberlake, Brother Brown, Morel, and Danny Teneglia. Their remixing prowess earned them a Grammy nomination in 2001 in the "Remixer Of The Year" category and in 2002 they were nominated and won a Grammy in the "Best Remixed Recording" category for their mix of Dido's hit single "Thank You." The group later went on to collaborate with P.Diddy on the track "Let?s Get Ill."

On top of all this, these two talented and driven artists tour throughout the year with 100-plus DJ gigs worldwide, leading Rolling Stone to declare, "there may be no other live DJ act better than Deep Dish."

Presents Dish Of The Day (CDS)