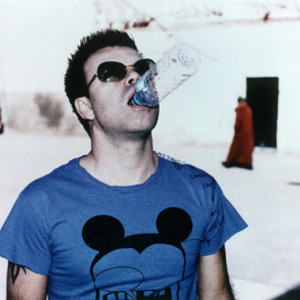 Paul Oakenfold (born August 30, 1963 in Greenhithe, Kent, England) is a world famous DJ and producer, whose works have helped define the mainstream of trance & elecronica. Not only does Paul Oakenfold produce records, but he also mixes them. In 1987 he spent several months in Ibiza with a few friends and fell in love with dance club music. Oakenfold produced "Happy Mondays' Pills 'n' Thrills and Bellyaches" before producing for U2, Massive Attack, Simply Red and New Order (to name a few).

Not only does Paul Oakenfold produce records, but he also mixes them. In 1987 he spent several months in Ibiza with a few friends and fell in love with dance club music. Oakenfold produced "Happy Mondays' Pills 'n' Thrills and Bellyaches" before producing for U2, Massive Attack, Simply Red and New Order (to name a few).

In 1999 after building an American fanbase he released "Tranceport" which was widely accepted by American trance fans.

After "Tranceport" came "Perfecto Presents Another World" which was arguably his most successful album, as it introduced millions more to his style.

His popularity grew as many of his works were inclulded in movie soundtracks such as Swordfish, The Matrix Reloaded, The Matrix Revolutions, Die Another Day (where he remixed the James Bond theme before later going to work on the videogame Goldeneye: Rogue Agent in 2004) and Collateral.

In 2002 he released Bunkka, which featured the hit single 'Starry-Eyed Surprise'. In the same year, Oakenfold was listed in Q's "50 Bands to see Before you Die" compilition.

2004 brought about the double album 'Creamfields', but it was in 2005 that he released the Perfecto Album entitled 'Perfecto Presents The Club'.

He also released the album Great Wall, recorded live at the Great Wall of China.

2006 saw the release of 'A Lively Mind' where he colloborated with, amongst others, Brittany Murphy (for the single Faster Kill Pussycat) and Pharrell Williams. 'A Lively Mind' is an edgier, more club-based album, as opposed to his calmer album Bunkka.


Paul Oakenfold's musical career started from admirably humble beginnings, playing soul and rare groove cuts in a Covent Garden wine bar in the late 'seventies with mate Trevor Fung. By the early 'eighties, having decided that NYC was the place, Paul decamped there armed only with the chutzpah to blag his way into a courier's job in West Harlem. At that time, more than any other, New York was bursting with musical invention: hip-hop was the freshest street sound around, and Larry Levan - arguably the first ever superstar DJ, inspiring a frenzy in the crowd that some guy playing records had never inspired before - was packing out the Paradise Garage every week with the revolutionary, hypnotic mixing style that would become the acid house DJ's stock in trade.

Returning to London, Paul became one of the UK's leading authorities on hip-hop. During his stint as an A&R man for Champion he signed the as-then unknowns Jazzy Jeff and the Fresh Prince, and Salt N'Pepa. Oh yeah, and he appeared on Blue Peter with a breakdancing crew who he was looking after at the time.

In 1985 young Paul spent the summer on a beautiful Balearic island called Ibiza. Ever heard of it? Oakey is as much responsible as anyone for making it the clubber's paradise it is today, as two years after that first trip he, alongside mates Trevor Fung, Nicky Holloway, Ian St Paul, Danny Rampling and Johnny Walker, went there for a week to celebrate his birthday. If the first visit had been good, this one changed their lives forever. Dancing in the warm night air beneath stars at the then open-air Amnesia to the oddest mix of music any of them had ever heard, courtesy of island legend Alfredo, Paul's urge to import this incredible experience - and the Balearic sound - back to England became too great to resist.

Prior to his Ibiza trip, Paul had been running a successful soul/jazz night at The Project in Streatham. On his return from the white island he persuaded the owner to let him run an after-hours 'Ibiza reunion' party. An attempt at a Balearic music policy had failed Paul one year earlier: the crowd just hadn't been ready to hear so many musical styles mixed together in one night, let alone in one DJ's set, but by 1987, and coupled with Paul's sheer enthusiasm and showman's talent for setting a musical mood, attitudes were changing. The night was a complete success, and led to what was to be - alongside Danny Rampling's Shoom - one of London's, and England's, first major acid house nights: Spectrum at Heaven in Charing Cross.

Spectrum grew out of Future, a night held in The Sanctuary, which annexed the much bigger Heaven club. Many never thought Spectrum (suitably subtitled 'Theatre Of Madness') would succeed: a 1500+ capacity club on a Monday night? Forget about it. And at first they looked to be right. For the first few weeks, attendance was low, leaving Paul and co-promoter Ian St Paul in dire financial straits. Then, suddenly, the vibe was out and the queues were literally going around the block. And a new phase in club culture had begun.

Spectrum continued for a couple of years, changing its name along the way to Land Of Oz. New initiates to the scene (as almost everybody was) marvelled at the full-on atmosphere of the place: hands reaching up into the sweat hazed air, laser lights pulsing and washing over the smiling crowd. Alex Paterson (later of The Orb) DJed in the VIP chillout area (the White Room), while Paul created his now trademark fervour in the cavernous main room.

Alongside running a seminal club night, Paul's production career had also begun by 1988 under the name Electra, working with long-time collaborator Steve Osborne. By 1990, with his work on The Happy Mondays' frugadelic Wrote For Luck and then Hallelujah (on the Madchester Rave On EP), Paul had created two of the cornerstone records of the indie-dance scene, a hybrid that demystified acid house for kids who'd been raised on a musical diet of guitar, bass, and drums. Paul was one of the guest DJs at The Stone Roses' legendary Spike Island gig, and his work with Osborne on The Happy Mondays' classic Pills, Thrills And Bellyaches LP (NME's 1990 Album Of The Year) won the pair the 1991 Brit Award for Best Producer.

Remix galore followed, for Mondays labelmates New Order; Massive Attack; The Shamen, and Arrested Development among others, as Paul and Steve began trading under the name Perfecto. If the name was little known at first that soon changed with the 1992 Perfecto mix of U2's Even Better Than The Real Thing. The track, with delicious irony, attained a higher chart position on release than the original song, thus signalling a watershed in the history and growth of dance music.

1993 saw Paul hired to provide the warm-up sonics on U2's Zoo TV world tour, and as a result the de facto arrival of the superstar DJ. The past decade has seen Paul rack up a dizzying blur of firsts and foremosts, including, not least, his being voted the number one DJ in the world by the readers of DJ magazine, and has heard the name "Oakey!" yelled hoarsely from clubs, fields (including an epoch-making set on the main stage at Glastonbury Festival, no less) and arenas in every corner of the globe.

On the production front Paul began to release his own tracks as well as continuing to turn in remixes, while Perfecto expanded into a fully-fledged label. Its offshoot, Perfecto Fluoro, became the label of choice in the mid-'nineties for the harder, trippier Goa trance sound. Today Perfecto boasts artists as diverse as Arthur Baker, Harry 'Choo Choo' Romero, and Timo Maas on its roster, and has gone from strength to strength by refusing to pander to only one style of dance music. Alongside the building of the Perfecto brand, Paul released a string of superlative mix CD's, amongst them his awesome New York set for Global Underground - still the series' biggest seller to date. And who else would have been commissioned to write the theme for what was certain to be the biggest TV show of all time? How did you guess? Paul wrote and produced the Big Brother theme, as Element 4, with Andy Gray.

On the club front, well, time for a deep breath...Ready? OK, here we go: Paul undertook a legendary two-year residence at Liverpool's Cream that took residencies in general to another level, from the personally designed DJ booth to die-hard fans (dubbed 'the Oakenfolk' in the press) who would travel the length and breadth of the country week in, week out to hear him whip up a magical musical storm, that would still be ringing in the ears and exciting the mind in the office or the lecture hall on Monday morning. Ever keen to push himself further and harder, Paul decamped in 1999 to become Director of Music at home, the multi-million pound superclub built defiantly - and, as it turned out, problematically - in Leicester Square, the heart of London's West End. That club's immediate downturn in popularity after Paul's departure goes to show the extent of his impact and following. There are but a handful of DJ's in the world who attract the fervour and create the excitement that he is capable of provoking in a crowd. You only have to be there when he plays to feel the electric charge in the atmosphere, more akin to the devotional than the merely appreciative.

Leaving home was a difficult decision for Paul, but he risked his UK and European profile, not to mention turning down the certainty of serious amounts of cash, to decamp to America, one of the few places in the world - ironically, given that it all started there - where dance music is yet to be championed and grasped in the way in which it is elsewhere around the globe. But this was a move typical of the man: where others would sit on their laurels and bathe in their hard-won glory, he has always taken the tougher option, sustained by his belief that greater effort means greater rewards. It's this attitude that saw him leave a huge fanbase in Britain to start all over again in the U.S.; that has seen him play to crowds in the low hundreds in isolated Alaska; and that led him to take a pair of Technics with him when he went on holiday to Cuba, and organise a free, unpromoted and not strictly legal party, purely to spread the word of great, life-affirming music and good, good times. This man lives, breathes and eats his art.

So what now for a man at the pinnacle of his profession, the world's premiere DJ? Why, upward, ever upward of course. 2001 has seen Paul score the Joel Silver-produced and John Travolta-starring Swordfish, remix the theme to Tim Burton's Planet Of The Apes, DJ on Moby's Arena:One U.S. tour, and make a triumphal return to his home shores with a free gig that left tens of thousands sweat-soaked and grinning like Cheshire Cats on London's Clapham Common. We can only expect that the best is yet to come, so stay tuned and prepare to be amazed.