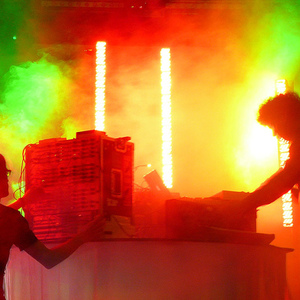 A London, UK production & remix team. Formed from the ashes of Simian in 2005 its members are James Ford and Jas Shaw. In addition to his work with Simian Mobile Disco, James Ford is a producer and has worked for bands such as the Arctic Monkeys, Peaches and Klaxons. Simian Mobile Disco was originally formed as a traveling DJ duet, playing on the side of their early four-piece band Simian. They ultimately released a number of low profile singles, such as "The Count" on Kitsun? Music, but arguably gained more fame for their remixes of artists such as Muse...

Simian Mobile Disco was originally formed as a traveling DJ duet, playing on the side of their early four-piece band Simian. They ultimately released a number of low profile singles, such as "The Count" on Kitsun? Music, but arguably gained more fame for their remixes of artists such as Muse, Klaxons, The Go! Team, Air and others. In 2006, Kitsun? released SMD's underground hit "Hustler", which features a vocal performance from New York singer Char Johnson.

Musically, Simian Mobile Disco is known for heavily stylized tracks ?often with minimal instrumentation? that associate themselves with a particular hook (vocal or instrumental ?see mix of "Whoo! Alright, Yeah...Uh Huh" by The Rapture), which is repeated throughout the track. There is often a breakdown (occasionally more ?see mix of "Magick" by Klaxons) comprising noise, drums and sometimes synths and vocals.

The band's debut album, Attack Decay Sustain Release was released on 18 June 2007 on Wichita Recordings. Among the tracks included on it are "Hustler", "Tits and Acid", "I Believe", "Hot Dog" and lead single "It's the Beat", which features Ninja from UK indie band The Go! Team on vocals. The album contains five new tracks, and the European version includes a bonus disc. The album was preceded by two mix compilations in April and May, for the "Bugged Out" and "Go Commando" series respectively.

SMD supported Klaxons at Brixton Academy on the 5 December 2007 and The Chemical Brothers at Aintree Pavilion on 9 December 2007 and Brighton Centre on 12 December 2007. SMD made a mix for Mixmag that came free with the January 2008 issue of Mixmag. While working on their second studio album, they released a collection of remixed SMD originals entitled Sample and Hold, which contains eleven tracks and was released in the UK on July 28, 2008. A North American date has not yet been announced.

In January 2009, they announced on their Myspace page that a new album was supposed to come out in 2009. Soon after that, they released a new track "Synthesise", on 12 February, through a music video (directed by Kate Moross and Alex Sushon) that "features live visual accompaniment" for the track. Two days later, a new song was broadcast on the BBC Radio 1 named "10,000 Horses Can't Be Wrong", soon followed by the release on 6 March of the official music video on their YouTube channel.

Their sophomore studio album Temporary Pleasure was finally announced on the 6 May, featuring many guests that they have encountered by their work as producers or their worldly tour including Gruff Rhys of Super Furry Animals, Alexis Taylor of Hot Chip, Beth Ditto of Gossip, and Chris Keating of Yeasayer.

On NYE SMD headlined The Greatest Show on Earth at Motion in Bristol with the Bugged Out rig and rocked.