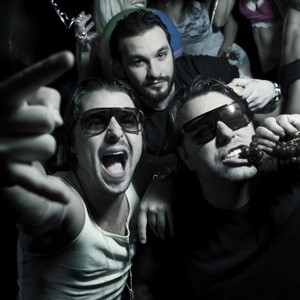 Swedish House Mafia is a house music supergroup comprised of DJ/producers Axwell, Steve Angello, and Sebastian Ingrosso. Each of the group members is an accomplished DJ/producer and label owner in his own right. The Swedish group initially teamed up in the mid-2000s, when they toured together as DJs and collaborated from time to time on one another's productions. Eric Prydz was also a member of the group for a while.

Axwell, Angello, and Ingrosso's breakout performance as Swedish House Mafia came on August 12, 2008, when they played the Main Room at Cream Amnesia in Ibiza, Spain, as part of Radio 1's Essential Mix Ibiza. A couple years later the trio signed a major-label recording contract with EMI and made their commercial production debut with the summer 2010 anthem One, also known as One (Your Name), the latter version featuring Pharrell Williams of The Neptunes on vocals. The song was a Top Ten hit in the United Kingdom, Sweden, the Netherlands, and Belgium.
According to Songfacts, the song was followed up by Save The World, which was premiered on BBC Radio 1 on April 22, 2011 by DJ Pete Tong and released on May 13, 2011 as a digital download. The song features the vocals of the trio's fellow Swede John Martin, whom the threesome first came across the previous winter.

Moth To A Flame (With The Weeknd) (CDS)

It Gets Better (CDS)

Until One (Deluxe Edition)