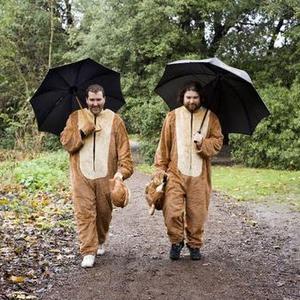 The 2 Bears are Joe Goddard, the production warp drive from pop starship Hot Chip and Raf Daddy, DJ and musical man about London town whose CV includes stints running labels for Basement Jaxx and Matthew Herbert and signing Toddla T. The Be Strong Songfacts explains that they met in 2009 while working together at the Greco-Roman soundsystem parties and got together one drunken all-nighter after a friend proposed that the pair, plus Joe Mount from the band Metronomy, form a band called 'The 3 Bears'.

Goddard and Rundell ultimately formed as a two piece without Joe Mount. Their first complete album, Be Strong, was released on January 29 2012.

The Night Is Young

Take A Look Around: Remixes (EP)