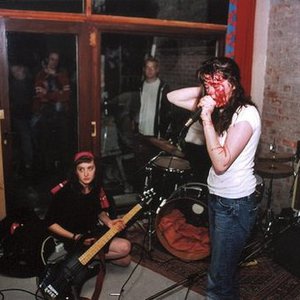 The Magik Markers are a noise rock band from Hartford, Connecticut. The members, Elisa Ambrogio, Pete Nolan and Leah Quimby started the band in their basement in 2001. After opening for Sonic Youth on their American tour in 2004, the band gained notoriety. Their debut album, I Trust My Guitar, Etc. (released in vinyl only), was released in 2005 on Thurston Moore's Ecstatic Peace label. In 2006, they released A Panegyric To The Things I Do Not Understand under Gulcher Records, the Markers' first proper CD.

Also in 2006, the band recorded a session for Southern Records' Latitudes series, which was released as The Voldoror Dance.

Leah Quimby left in May 2006. Various people filled in before they eventually settled as a duo comprised of original members Pete and Elisa. Julie Tomlinson was picked up in 2007 to handle keyboard and bass duties on tour. For the rest, read wikipedia.

Lately Ambrogio has been touring with Six Organs of Admittance as well as collaborating with Ben Chasny as 200 Years. Nolan has been playing as Spectre Folk as well as running his Arbitrary Signs label and playing drums live with Jandek.

Magik Markers plays in Veiko ?unpuu's feature film "The Temptation of St. Tony". We can hear and see them twice during the film.

Surrender To The Fantasy

For Mary Meyer, The Blind Bear Of The Dustbowl