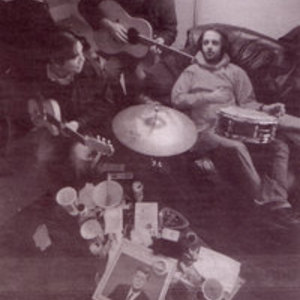 Psychedelic Horseshit are a shitgaze band from Columbus, Ohio. The band usually consists of Matt Whitehurst and Rich Johnston, the former typically playing guitar and always singing, and the latter typically playing drums. They've had many, many bassists, almost nearing the fifteen mark. The start of the band spawned four different four-track recorded EPs: "King Tubby's Baddness Dub," "Sings the Anti-Concept," "Who Let The Dogs Out," and "Blown Speaker Standards.

The start of the band spawned four different four-track recorded EPs: "King Tubby's Baddness Dub," "Sings the Anti-Concept," "Who Let The Dogs Out," and "Blown Speaker Standards." All of them were homemade CD-R releases that came cased in stapled paper, were emblazoned with rough collages, and "last about as long as it takes to smoke a cigarette?disposable yet undeniably essential."

Sometime after the aforementioned EP's were released, they released their first full-length album, "Magic Flowers Droned," on the highly acclaimed label Siltbreeze with help from their friends Times New Viking. It was hated by many critics as well as praised by many critics and became known to be one of the first releases to be given the ridiculous tag "shitgaze." Although it had little relevance to the genre shoegaze, the "shit" portion of it was mostly brought about due to the extremely lo-fi recording style of the album.

After almost two years of no releases, lots of touring, and lots of drugs, it was finally announced in spring of 2009 that several releases would be coming out soon: a self-released CD-R EP entitled "Live At Pompeii" that was recorded by Kip of Cloudland Canyon, the also self-released "Golden Oldies" 12" LP that featured everything from all of the old CD-R EP's, "Shitgaze Anthems" 12" EP released on Woodsist, and the yet to be released "Acid Test" 12" EP on Troubleman Unltd., "Beached Wails" 7", and their second full-length on Siltbreeze, "Too Many Hits."

With the release of "Shitgaze Anthems," they've went in a more psychedelic and pop direction with, although still somewhat lo-fi, much better production. As far as musicianship and coming up with good and catchy (very good and catchy, I might add!) melodies, they've improved significantly since their first full-length. Let's hope it keeps getting even better than it has already gotten.