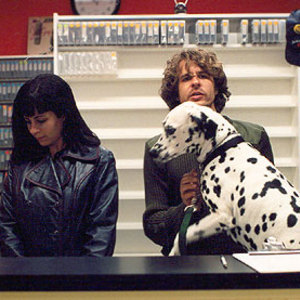 Quasi is an indie rock band formed in Portland, Oregon in 1993, consisting of the ex-husband and wife team of Sam Coomes (vocals, guitar, roxichord, various keyboards) and Janet Weiss (vocals and drums). In 2007, bassist Joanna Bolme, also of Stephen Malkmus and the Jicks became an official member of the band; she had toured with Quasi in 2006. In 1990, Coomes, Weiss, and Brad Pedinov formed the band Motorgoat.

In 1990, Coomes, Weiss, and Brad Pedinov formed the band Motorgoat. The band released two self-released cassettes and one 7" single before dissolving in 1993. Quasi started recording as a duo in 1993. They played with various additional musicians in early live appearances, but eventually settled on playing live as a duo as well. They self-recorded and self-released a cassette and a CD in 1993. They recorded R&B Transmogrification in the Portland band Pond's basement recording studio and released it on Up Records in 1997. They released two more albums with Up: Featuring "Birds" in 1998 and Field Studies in 1999; both albums were recorded at Jackpot Studios in Portland, Oregon.

In 1998 and 1999 they toured the U.S., Europe, Australia, and Japan opening for and serving as the backup band for Elliott Smith (who Coomes had played with in Heatmiser) as well as touring on their own in the U.S. and Europe. In 2001 They home-recorded The Sword of God and released it on Touch & Go. Quasi had been somewhat political since its inception, but their opposition to the 2003 Invasion of Iraq showed through in a straight-forward way with the release of Hot Shit! in 2003, particularly in the songs "White Devil's Dream" and "Master and Dog." When the Going Gets Dark followed in 2006, released on Touch & Go in the U.S. and Domino Records in Europe, as with Hot Shit!.

In Spring 2009, the band announced that they had signed to the Kill Rock Stars label, and were due to release their already recorded next album in the latter half of the year. That album, entitled American Gong, was released February 23, 2010 to generally favorable reviews. It was their first and only album to feature third member Joanna Bolme. Following a tour of Japan, Europe, and the United States in support of the full length, Bolme left the band. A duo again, Sam and Janet are recording material for a new album.

The Sword Of God