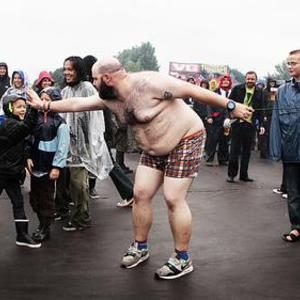 Fucked Up is a hardcore punk band from Toronto, Ontario, Canada. The band formed and played their first shows in early 2001. The initial practicing lineup consisted of 10,000 Marbles (Guitar), Concentration Camp (Vocals), and Mustard Gas (Bass Guitar). Just prior to recording their demo tape, Concentration Camp moved to guitar and vocal duties were taken over by Pink Eyes (also known as Mr. Damian). Drums are played by Mr. Jo (also credited as G. Beat or J. Falco) and Young Governor was added as a third guitarist in 2007.

The band formed and played their first shows in early 2001. The initial practicing lineup consisted of 10,000 Marbles (Guitar), Concentration Camp (Vocals), and Mustard Gas (Bass Guitar). Just prior to recording their demo tape, Concentration Camp moved to guitar and vocal duties were taken over by Pink Eyes (also known as Mr. Damian). Drums are played by Mr. Jo (also credited as G. Beat or J. Falco) and Young Governor was added as a third guitarist in 2007.

Following the release of the demo, the band embarked on a long series of 7" vinyl 45 rpms. Unlike many of their contemporaries, the band shunned full length LP or CD formats, preferring to output their music two songs at a time. While some record distributors refused to carry the singles, they were generally released to broad appeal, receiving glowing reviews in many punk fanzines. The artwork and feel of the records was a tribute to the [Dangerhouse Records era of punk vinyl.

The band released the "No Pasaran" 7" in May of 2002. The records aesthetic and philosophy was greatly influenced by anarchism and the participation of anarchists in the Spanish Civil War in particular. The cover and insert featured anarchist propaganda posters and portraits of Spanish farmers and peasant soldiers.

The Police 7" was released on March of 2003, quickly followed by what is considered the bands most significant recording, the Baiting the Public 7" in May of 2003. This single was in tribute to the Viennese Actionism, a far left art movement during the 1960s, and the Situationist International. The record featured one song spread over two sides, and illegible liner notes, meant to shock and annoy the buyer.

Two more 7"'s followed in 2004, the Dance of Death single, and the Litany 4-song EP. The vinyl releases to this point were collected on 2004's Epics in Minutes CD.

The band's use of imagery and symbolism took a decided turn after the release of Epics in Minutes, as it was followed by two obscure and limited 12"s, the Looking for Gold 12", and the live Let Likes be Cured by Likes 12". Many felt at this point the band's message became esoteric to the point of confusion, while others felt the turn towards a more convoluted approach was ultimately more rewarding. The Looking for Gold 12" contained no liner notes or credits, no song titles, and a hidden track. It was self-released by the band in 2004 in a limited run of 600 copies and immediately became one of the most infamous and sought-after modern hardcore punk releases, selling for over $100 on internet auction sites like ebay. The title track was 17 minutes long, used 19 guitar tracks, had a three minute drum solo and contained 4 minutes of whistling, all unconventional by punk rock song-writing standards.

Following a lengthy and rumoured self-written interview in Maximum Rock and Roll, that discussed some of the band's politics and identity, many people became suspicious of the band's intentions, based on their allusions to mind control, fascism, early 20th centruy occultism, and Nazi mysticism. The release of a split 7" in 2004 with the band Haymaker did little to allay these concerns as it contained a picture of Hitler addressing a Hitler Youth Rally in 1938. A public clarification followed in late 2004 after the band was attacked onstage at a concert in Toronto.

In the summer of 2004 the band returned to form with the release of the Generation 7" and 12" EPs. The record contained the trademark sound the band had developed with their earlier releases. The record would go onto sell more than 6000 copies in that year and would represent the definitive Fucked Up release of the later period. The live performance of "Generation" had at this point become a focal point of most shows and saw hundreds of people dance and mosh in a mad frenzy of violence and aggression, and would result in many injuries.

After touring for most of 2005 the band took on David Eliade as a quasi-full time manager/promoter, and released a new UK-only 7", Triumph of Life, on VICE records. The band is currently signed to Jade Tree Records, on which they released the double album Hidden World in 2006. Hidden World was generally well received in the music community, although many traditional punk fans who once glorified Fucked Up for their "short and fast" older songs couldn't quite grasp Hidden World, which was 74 minutes long. Owen Pallett (commonly known as Final Fantasy) did the strings for the album, and Alexisonfire's vocalist George Pettit made an appearance as a guest vocalist on the final track. The album served as Fucked Up's "major label debut", receiving positive reviews from Pitchfork Media, SPIN magazine, and NOW magazine. The albums was also picked as "#1 punk album of the year" by the Canadian magazine Exclaim!.

After Hidden World, Fucked Up began their yearly record series based off of the Chinese calendar. They released the Year Of The Dog 12" in late 2006. Fucked Up also appeared on MTV Live Canada in January 2007. Fans in attendance reportedly caused $2000 worth of damages during the recording. After a European tour in the spring and an early summer U.S Tour that took the band to the U.S Southeast for the first time ever, Fucked Up proceeded to play several major music festivals including South by Southwest, Tales Of The Jackalope, Oshesga Fest, and POP Montreal. In July of 2007, the band released the second album in the Chinese calendar series "Year of The Pig". The 12" is technically a single, featuring the song Year of The Pig and it's b-side Black Hats. Year of The Pig is over 18 minutes long, and is about the treatment of sex workers in Canada.

Currently, the band has made comments about several different projects, including a follow up full length to Hidden World, and a musical based off the song 'David Comes To Life' from the Hidden World album.

Year Of The Horse - Act Two

Year Of The Horse - Act Four

Year Of The Horse - Act One

Year Of The Horse - Act Three

Year Of The Snake (EP)

Year Of The Hare (EP)

Year Of The Dragon (EP)