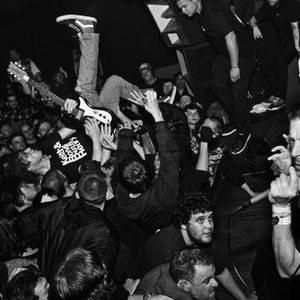 OFF! are an American hardcore supergroup. The band was formed in Los Angeles, California in late 2009 by Circle Jerks/Black Flag singer Keith Morris, Burning Brides frontman Dimitri Coats, Redd Kross bassist Steven Shane McDonald, and Rocket from the Crypt/Hot Snakes drummer Mario Rubalcaba. The idea to form the band came after Coats had worked as producer on a Circle Jerks album which fell apart.

During that time, Coats and Morris had written several songs together which they used to start OFF!. The group made its live debut at the 2010 South By Southwest Music Festival in Austin, Texas. Off!'s first Los Angeles show featured an original art installation by Raymond Pettibon at a downtown warehouse space.

The first release by Off! was a 7" vinyl EP called 1st EP, which debuted on October 13, 2010. That EP, along with three more EPs, were later released as a four 7" vinyl box set entitled First Four EPs on December 14, 2010. The collection contains sixteen songs and features artwork by Raymond Pettibon.