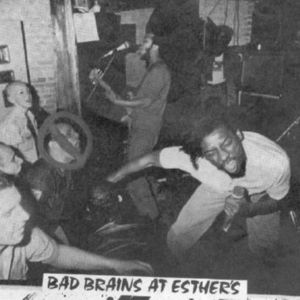 Bad Brains are a United States hardcore punk band, originally formed in Washington DC in 1977. Though the band's members objected to the term "hardcore" to describe their music, they are considered pioneers of hardcore punk, and their debut album Bad Brains is considered by many to be one of the finest hardcore albums ever. Just as often as their sound is fast and frantic, the band often plays full-on dub and reggae.

Originally formed as a jazz fusion ensemble, Bad Brains developed a very fast and intense punk rock sound, which was both musically complex and more extreme than most of their punk contemporaries. They were also an adept reggae band, in a sort of Jekyll-and-Hyde arrangement, while later recordings also featured elements of funk and heavy metal. Bad Brains were also notable as religious Rastafarians.

Bad Brains have broken up and reformed several times over the years (most recently as the Soul Brains), sometimes with different singers and/or drummers. Their existence has been in three periods: 1977?1984, 1986?1995, and 1997?present. The group's classic line-up was singer H.R., guitarist Dr. Know, bass guitarist Darryl Jennifer, and drummer Earl Hudson.

This might have been the end of the Bad Brains?if it were not for Ric Ocasek. Ocasek, frontman of new wave band The Cars, had seen the group play in Boston, and asked them to record an album. Having arrived back from tour with no place to live and no equipment, the Bad Brains took him up on his offer. The result was Rock for Light, released on the large independent label PVC/Jem (who also released The Cure's first album).

In the early '90s, H.R. embarked upon a solo reggae career. During his initial departure, he was replaced along with drummer Hudson by new singer Israel Joseph I and their sound became more in the vein of alternative rock.

Marking a return to their trademark hardcore punk/reggae sound, the original lineup of the Bad Brains released Build a Nation in June 2007, a new, critically acclaimed album with longtime fan Adam Yauch of the Beastie Boys handling the production. The Beastie Boys, were huge Bad Brains fans, and they intentionally selected a name with the initials B.B. because of this.