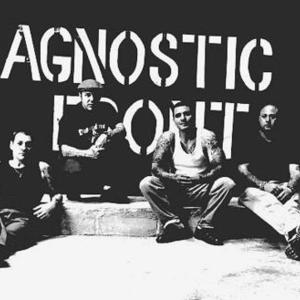 Agnostic Front is a New York hardcore punk (NYHC) and crossover thrash band. Formed by Vinnie Stigma and Roger Miret in 1982, they soon added Ray Barbieri and Adam Moochie to form the original line-up. Their debut, United Blood EP, was released in 1983 on an independent label. It is widely regarded as pure hardcore punk and lyrically charged and has since become a collector's item. The follow-up was Victim In Pain (1984) and is regarded as a seminal New York hardcore release. Dave Jones replaced Ray Barbieri on drums.

The follow-up was Victim In Pain (1984) and is regarded as a seminal New York hardcore release. Dave Jones replaced Ray Barbieri on drums. The album pushed the band to the forefront of New York's fledgling hardcore scene, which was centered around CBGB's, where they played with bands like Cro-Mags and Murphy's Law.

1986's Cause for Alarm was a difficult album to record, due to constant line-up changes and personnel problems. Released on Combat Records, Cause for Alarm added thrash metal influences, creating a new genre known as 'crossover thrash'. Many of Agnostic Front's supporters considered the album a travesty and a sell-out, but it was hailed in other corners, and vastly expanded their audience.

With yet another new lineup, the band soon released Liberty & Justice in 1987. The original NYHC scene had collapsed by this time, and the album featured stripped down punk with a lack of thrash influences, yet it contained many metal-style guitar solos. It was a failure compared to previous records. Sometime later, Miret was arrested on drug charges after releasing a live album, and spent his time in prison writing new songs while Stigma and the band toured Europe for the first time. The lyrics written by Miret formed most of 1992's One Voice, which featured members of Stigma's Madball, and Sick Of It All. Not long after its release, the band decided to call it quits. Their last concert was at CBGB's in 1993; Last Warning, which was also released with United Blood EP on the end of the record. Vinnie Stigma apparently remarked that he hated Last Warning.

Stigma and Miret reformed Agnostic Front in 1997, signing to Epitaph Records and recruiting Jim Colletti on drums and Rob Kabula on bass. Their latest venture was titled Something's Gotta Give, although Miret announced in the UK the original title would be Today, Tomorrow, Forever. In 1999, they followed up with Riot! Riot! Upstart which was also hailed by critics. Their comeback albums have sold well and been mostly acclaimed by music critics for their pure street punk/Oi! sound. In 2001 they released the album Dead Yuppies. Songs from this album were rarely played live, as the band considered it more a product of Loved and Hated, Jim Colletti's side-project bands. In 2002, Miret fronted a new band, Roger Miret and the Disasters, looking for a sound akin to old school punk and Oi!.

Agnostic Front came out in 2005 with the album Another Voice. The album was regarded mainly as a follow up to One Voice. It, however, did receive some criticism from fans and the press for apparently changing their music to fit the current wave of "tough guy hardcore" bands. Musically, the album bears resemblance to bands that were heavily influenced by Agnostic Front, such as Hatebreed. Miret's vocals on the album particularly seemed to turn off many less new school hardcore-oriented fans.

On March 7th 2006, Agnostic Front released their long-awaited DVD Live At CBGB's. This follows the efforts of many bands to try and save CBGB's from shutting down.

On November 6th, 2007, Agnostic Front released their ninth studio album, Warriors. This album marks a return to their late '80s sound of crossover thrash mixed with a continuation of the new school hardcore sound.

My Life My Way