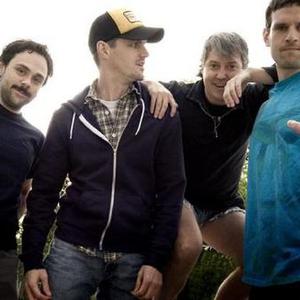 Propagandhi is a punk band formed in Portage La Prairie, Manitoba, Canada in 1986 by Chris Hannah and Jord Samolesky. While their earlier work draws from the punk and skate punk tradition, recent Propagandhi records have moved towards a heavier, hardcore thrash-influenced sound. The band members are known for championing various political causes. They have taken an active stance against human rights violations, racism, homophobia, imperialism, fascism, capitalism and organized religion.

The band members are known for championing various political causes. They have taken an active stance against human rights violations, racism, homophobia, imperialism, fascism, capitalism and organized religion. The band supports vegan lifestyles, animal rights campaigns and feminism, and have described themselves as "Gay Positive".


In 1986, Samolesky and Hannah recruited original bassist Scott Hopper via a "Progressive Thrash Band, bassist wanted" flyer they posted in a local record shop. Hopper was replaced around the turn of the decade by Mike Braumeister. This was the first lineup to perform live. After several demos and larger shows (including one with Fugazi) made a name for the band, Braumeister moved to Vancouver and a young musician with an inclination towards poetry named John K. Samson became the band's third bassist. It was this lineup of Hannah, Samolesky and Samson that would go on to put out the band's early albums and gain recognition outside of Canada.

In 1992, Propagandhi played a show with NoFX. Impressed by their performance, Fat Mike signed them to his independent record label Fat Wreck Chords and asked them to come to L.A. to record their debut album. 'How To Clean Everything' was released in 1993, musically, the album owed a lot to 90s skate punk, but there were still glimpses of the band's 'Progressive Thrash' roots in some of the riffs.

The band spent the next three years touring and enjoying the popularity provided by the explosion of punk rock in the mid-1990s. In 1996, they recorded and released their second album, on Fat Wreck Chords - "Less Talk, More Rock". The album title was a joke, as Propagandhi were (particularly at that point in their career) well known for going into lengthy rants during their live performances.

The album was, if anything, more politically out-spoken than its predecessor, with song titles including; "Apparently I'm a P.C. Fascist (Because I Care About Both Human and Non-Human Animals)", "Nailing Descartes To The Wall / (Liquid) Meat Is Still Murder," and "... And We Thought That Nation States Were a Bad Idea." However, for all this, the album did see Propagandhi begin to find a sound more their own than on their debut - musically and lyrically - as well as seeing John K. Samson move from bassist/backing vocalist to occasional singer/songwriter (Samson would go on to re-work a handful of his songs from this period with The Weakerthans).

In 1997, John K. Samson decided to quit the band and form The Weakerthans. Chris and Jord co-founded the record label G7 Welcoming Committee Records (G7 would later release the first Weakerthans' album). The label's co-operative economic structure is based upon that proposed in Robin Hahnel and Michael Albert's 'Parecon', and was initially started thanks to a $50,000 loan from Fat Mike.

During this time, Propagandhi released a collection of demos, alternate takes, covers and live songs called 'Where Quantity Is Job #1.' A new bassist - Todd Kowalski of the bands I Spy and Swallowing Shit (who have also put out material on G7) - replaced Samson that year.

After four years, Propagandhi released their third full-length album, 'Today's Empires, Tomorrow's Ashes'. The album marked a major departure from their previous works; the song titles and lyrics of 'Today's Empires' furthered the sphere of their political views and presented their ideas in a more coherent and, arguably, more mature way. Bolstered by the addition of Todd's aggressive song-writing (in contrast to Samson's earlier influence) and an increased density of guitar lines, this album was also the band's heaviest to date and had much more in common with hardcore thrash than with skate punk. The album included enhanced content, with videos and essays on topics such as COINTELPRO and the Black Panther Party, and US foreign policy.

Chris Hannah adopted the pseudonym "Glen Lambert" for use during the release of Potemkin City Limits, causing confusion among some fans, reviewers, and commentators. In September 2005, G7 Welcoming Committee Records jokingly announced that Chris had left the band in 2003, and that the remaining members had found a replacement in Glen Lambert, formerly of the Portage Terriers. This claim was quickly revealed to be untrue through a multitude of sources.

Without admitting to the joke, Propagandhi announced on August 14, 2006 that "Glen Lambert" had been dismissed and would be replaced by "former" member Chris Hannah. They also added guitarist David Guillas, making the band a four-piece for the first time. Guillas, nicknamed "The Beaver", is a former member of two Winnipeg-based rock outfits, Giant Sons and Rough Music.

In 2007 the band released a DVD entitled 'Live from Occupied Territory', which features a recording of their set at The Zoo in Winnipeg on July 19, 2003. Proceeds of the DVD benefit the Grassy Narrows blockade and the Middle East Children Alliance. Included on the DVD are two full-length documentaries: 'Peace, Propaganda and the Promised Land', and 'As Long as the Rivers Flow'.

On March 10, 2009 Propagandhi released 'Supporting Caste'. In a press release, the band had this to say about their latest album:

"Propagandhi are proud pleased delighted required to announce the release of their new album, Supporting Caste.

Recorded at the band's own Illegal Combatant Studios and the world-renowned Blasting Room in Ft. Collins Colorado, Supporting Caste is the fifth full length release from Winnipeg's Propagandhi.

Crafted in collaboration with Bill Stevenson (Black Flag, Descendents, Zeke, 7 Seconds), this 12 song collection of boundless power and depth is a 50 000 watt forward-thinking tip-of-the-hat to the giants ? Voivod, Rush, SNFU, Sacrifice, Razor, Guilt Parade ? that have gone before them.

Legendary and unrepentant residents of humankind's ideological peanut-gallery, Propagandhi does not disappoint with Supporting Caste, launching crude rockets into the heart of the prevailing order with meditations that range in focus from the humane slaughter and consumption of non-vegans in an elaborate 18-course banquet (with wine pairings) to the apparent confusion of turning on the TV to watch a simple hockey game and having to wonder whether or not the Nazi's actually lost the war after all.

Supporting Caste: 12 new laments, reveries and extrapolations from 4 visibly-aging prairie skids who still cannot believe that of all the gin joints in all the galaxies in all the universes, they had to be born on this one."

Propagandhi are known for their slow-pace production, taking many years between one record and the next one, and their rare live shows, which take place in small venues and, generally, got the entrance fee fixed at an affordable price.

Where Quantity Is Job #1