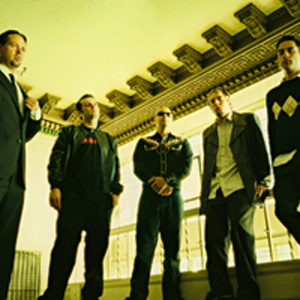 Strung Out is a punk rock band from Simi Valley, California, formed in 1992. They are known mainly for their musical style, which fuses aspects of punk rock and metal to form their primary sound. They have released nine albums on Fat Wreck Chords and appeared on numerous compilations and skate/surf videos. They have played on the Warped Tour and continue to tour internationally. The original lineup consisted of vocalist Jason Cruz, guitarists Jake Kiley and Rob Ramos, bassist Jim Cherry and drummer Adam Austin.

The original lineup consisted of vocalist Jason Cruz, guitarists Jake Kiley and Rob Ramos, bassist Jim Cherry and drummer Adam Austin. After releasing a self-titled 7" record, they became one of the first bands to be signed to Fat Wreck Chords, the record label owned and operated by Fat Mike of the band NOFX. Austin left the band in 1992 and was replaced by Brad Morrison who also left the band and was replaced on drums by Jordan Burns, formerly of fellow Simi Valley natives Ten Foot Pole. Their first album, Another Day in Paradise, was released in May of 1994. Suburban Teenage Wasteland Blues followed in 1996. In 1998 they released The Skinny Years...Before We Got Fat, a compilation album of their pre-Fat Wreck Chords material.

The band showed notable musical growth on their 1998 album Twisted by Design, which was both speedy and technical but also punk-based and with darker overtones. The album established a mixture of the fast, poppy sound the band had established with Suburban Teenage Wasteland Blues but mixed it with more atonality and more abstract song structures. Bassist Jim Cherry left the band in 1999 and went on to play in Pulley and Zero Down, but died of heart failure in 2002. He was replaced by Chris Aiken, whose musical background had a strong impact on the 2000 album The Element of Sonic Defiance, which continued in the fast, melodic punk tradition of the band while introducing more hard rock and metal elements.

In 2002 the band released their fourth full-length album An American Paradox, their first release to appear in the Billboard Top 200. The initial production run contained a bonus song entitled "Don't Look Back". A video was filmed for the song "Cemetery" and was included on several punk rock video compilations. In 2003 they recorded and released a live album as part of the Fat Wreck Chords Live in a Dive series. Exile in Oblivion, was released in 2004, with a video filmed for the song "Analog." Strung Out released their sixth full-length album, Blackhawks Over Los Angeles on June 12, 2007.

In March 2009, Strung Out released a compilation of B-sides, demos, and covers called "Prototypes and Painkillers" with material from all eras of the band's history. Many of these tracks have been on various punk compilations and/or were included in their "Live in a Dive" recording.

On September 29, 2009, Strung Out Released a their 7th studio album titled Agents of the Underground.

Songs of Armor and Devotion

Black Out the Sky

Top Contenders: The Best Of Strung Out

Agents Of The Underground

Live In A Dive