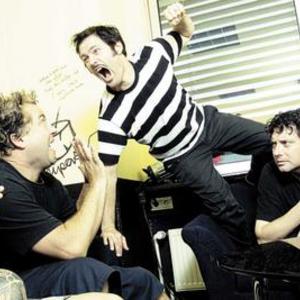 Lagwagon is a punk band based in the small town of Goleta, California. Forming in 1990, they have released seven albums, all through San Francisco label Fat Wreck Chords. They are widely viewed as catalysts for the pop-punk movement of the 1990's, opening the door for some of the subgenre's more mainstream bands. The most recent members of Lagwagon include Vocalist Joey Cape, guitarists Chris Flippin and Chris Rest, bassist Joe Raposo, and drummer Dave Raun.

Vocalist Joey Cape also plays guitar in punk rock cover band Me First and the Gimme Gimmes and sang in the recently disbanded experimental punk band Bad Astronaut. Recently, he started a new project called Afterburner, which was expected to be similar to Bad Astronaut but has already been disbanded and the Afterburner myspace page (with four tracks) has been deleted. Joey has since started an alt-pop-punk project with other SB rockers named The Playing Favorites.

After 9 years and 5 records, the band remained silent in 1999-2000. They reunited in 2002 and released a comeback album titled Blaze in the following year. Despite the brief hiatus, the group has never broken up. In 2004, Joey released a split acoustic album with No Use For A Name frontman Tony Sly, which features acoustic versions of songs by both bands. Lagwagon's latest album, entitled Resolve, was released in October 2005 and is a tribute to the life of longtime friend Derrick Plourde (original drummer for Lagwagon and Bad Astronaut), who commited suicide on March 30, 2005.

Their most recent studio recording is a return to form with a short EP entitled I Think My Older Brother Used to Listen to Lagwagon that was released in August 2008.

The band has also, as of very recently, gotten back together with original guitarist and bassist for a 2012 tour to back up the release of their aforementioned box set.

Putting Music In Its Place CD6

Putting Music In Its Place CD5

Putting Music In Its Place CD4

Putting Music In Its Place CD3

Putting Music In Its Place CD2

Putting Music In Its Place CD1

Live In A Dive