No Use For A Name 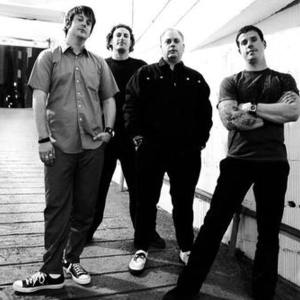 No Use for a Name (often abbreviated NUFAN) was a punk rock band from San Jose, California. They were formed in 1987 by Tony Sly and Rory Koff. The band is highly praised in the skate punk and hardcore scenes, though their sound has evolved considerably through the years, taking on a much lighter and poppier brand of melodic punk. NUFAN's debut album, Incognito, was released in 1990 through New Red Archives.

NUFAN's debut album, Incognito, was released in 1990 through New Red Archives. The band has released a single and one more full-length on this label, until signing up with Fat Mike's label, Fat Wreck Chords, on 1993. At that year, No Use For a Name released its first record on Fat, The Daily Grind, which turned to be a highly successful album.

In 1995, After the release of Leche Con Carne, their fourth full-length, Chris Shiflett (now in the Foo Fighters and Me First and the Gimme Gimmes) and Matt Riddle (also in Pulley) joined the band to play Guitar and Bass, respectively. In 1997, after the success of Making Friends, the band went on a worldwide tour through U.S., Europe, Australia, Canada, and Japan.

Chris left the band to play in the Foo Fighters, so now they have Dave Nassie playing guitar

The band released their 8th full-length album, titled Keep Them Confused, on June 14th, 2005. It takes a more political, philosophical and religious position than earlier releases.

A greatest hits collection titled All the Best Songs was released on July 10, 2007.

A new fourteen song full-length studio album entitled The Feel Good Record of the Year was released on April 1, 2008. In 2009, when promoting the album in Europe, Dave Nassie left the band to join the ranks of Bleeding Through. In August 2009 the band announced, that they replaced Nassie with Lagwagon's guitarist and founding member of RKL, Chris Rest.

In December of 2010, Rory Koff announced to the band he would need time off from touring to go full time with his snowplow business and eventually was replaced by new full-time drummer Boz Rivera (of King City, RKL, and The Mad Caddies.). Koff was the last remaining member of the original 1987 No Use for a Name line up.

The Feel Good Record Of The Year

All The Best Songs