Me First and the Gimme Gimmes 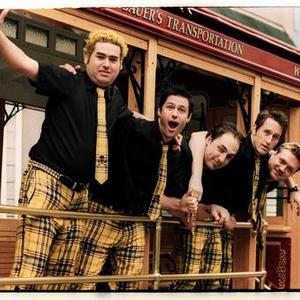 Me First and the Gimme Gimmes are a punk cover band composed of members of other well known bands such as Swingin' Utters, NOFX, Foo Fighters, and Lagwagon, who all play in Me First and the Gimme Gimmes as their schedules permit. Their first live performance was on 4/20/1996 at the Chameleon Club in San Francisco. The studio core comprises Spike Slawson on vocals, bassist Fat Mike, Joey Cape on guitar and backing vocals, Dave Raun on drums, and Chris Shiflett on guitar (his brother Scott of Face To Face/Viva Death fills in for Chris on tour).

Originally a themed 7" singles project, now each of their full length albums covers a different genre of music spanning the 50's to the 90's. Their first release in 1997 was entitled Have A Ball, followed by Are A Drag in 1999. In 2001 they released Blow In The Wind and two years later released Take A Break. Almost immediately after the release of Take a Break the released a live album Ruin Johnny's Bar Mitzvah The genres they've butchered now include country, on Love Their Country featuring covers of songs made popular by The Dixie Chicks, Johnny Cash and others. Their most recent release is a collection of B-sides from their album Have a Ball, simply titled Have Another Ball.

The Gimme Gimmes perform to entertain themselves as much as for the entertainment of their fans. Their albums and concerts are some of the most lighthearted and off the wall musical experiences in the punk world. Concerts are often interrupted between songs to freshen cocktails at the on stage tiki bar. CD liner notes relate the hardships of recording such as Fat Mike getting so caught up in "Wild World" that he believed he was Fat Stevens, a guitar-toting Islamic Extremist, so that when Spike sang "All My Lovin" he mistook it for "Allah my Lovin" and condemned Spike to death for heresy.

The Gimmes are also known for their costumes. Each album has a 'theme' for which they all dress up for the cover art and live shows. Some themes include red suits, metallic suits with fezzes, cheerleader outfits, drag (each Gimme dressed as a character from a musical they took songs from on the cover of Are A Drag: Chris Shiflett was Columbia and Spike was Dr Frank N. Furter from Rocky Horror, Joey Cape was Annie, Fat Mike was Sandy from Grease and Dave Raun was Dorothy from the Wizard of Oz). During a Warped Tour they dressed as AFI, to the confusion of many fans. Most recently they have been dressing as cowboys, but are possibly best known for their lurid Hawaiian shirts.

Or their live album, "Me First and the Gimme Gimmes Ruin Jonny's Bar Mitzvah", the band performed for a crowd of 30 at a Bar Mitzvah. The CD contained video of the actual event and the liner notes were written by attendee Benjamin Rosenblatt who describes the events: "They made a lot of mistakes. They even started a song then stopped, then started again." -track 7 "Strawberry Fields Forever" on the CD.

Are We Not Men? We Are Diva!

Blow In The Wind