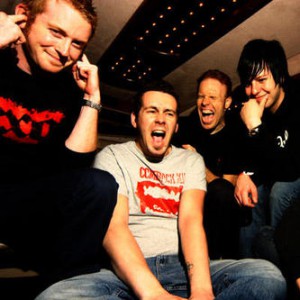 Here is the story?the whole truth in its entirety. The Chicago scene, in all of it's incestuous nature, has offered all types of music and collaborations for as long as music has existed in this Windy City, and rather than honing in on the sonic traditions that have been oh so prominent among a vast array of punk rock and hardcore groups, Break the Silence has ideas of their own to express. Substituting tradition and repetition with reinvention, the band has been most commonly accepted as an embodiment of originality.

The Chicago scene, in all of it's incestuous nature, has offered all types of music and collaborations for as long as music has existed in this Windy City, and rather than honing in on the sonic traditions that have been oh so prominent among a vast array of punk rock and hardcore groups, Break the Silence has ideas of their own to express. Substituting tradition and repetition with reinvention, the band has been most commonly accepted as an embodiment of originality.
Forming from the ashes of a handful of Chicago bands such as 88 Fingers Louie, SKG, All Else Fails, Mike, and Every Light Red, the members have all had different ideas to bring to the creative table and help shape the unique sound that Break the Silence has continued to deliver.

I guess it really started with All Else Fails recruiting Dan Precision as guitarist (Mr. Precision had worked with AEF frontman Andy Lareau before in a melodic hardcore group called Nice Guys Finish Last).
Shortly after Precision was recruited, Lareau decided to leave the band. Brian Phee, Jay Gronwick, Mike Ford, and Dan Precision were all left back at square one.

Taking everything as opportunity rather than failure, the boys decided to form a new group, under a new name, with a new sound. They decided to name the project Break the Silence, and began extensively writing music?still in search of a voice to tie everything together.

Meanwhile, 19-year-old Dan Wintercorn had musical wheels turning as well. He had been writing songs on his own for a solo project, which was later to expand into melodocore group Every Light Red. Later, while attending Warped Tour '02, Wintercorn came across a flyer for vocal auditions for BTS. Since options with ELR were quite limited, he decided to pass along an early demo of some of the ELR songs to them, and immediately caught their interest.

At that exact moment, Wintercorn had spent every free minute writing lyrics to the demo that was given to him by Gronwick, and completed 3 songs (which were later to be named ?Close My Eyes', ?Forgiven, Not Forgotten', and ?Iris') to audition with.
When the audition took place, the band was taken aback by the fact that Wintercorn was laying these intense screams of this pristine melodic hardcore, yet accompanied it with melodic vocals all at the same time. This fashion has been commonplace for Wintercorn's style, but seemed relatively foreign to the BTS boys, so needless to say, at first the band as a whole were quite indifferent, but still quite impressed.

After 3 auditions and 2 demo sessions with BTS, Wintercorn was asked to be the vocalist of Break the Silence, and the band as a whole was born. Now began the intense writing, until about 1 month later, when they finally put together enough music to perform on November 7th, 2002 with Fall Out Boy, Much the Same, Belvedere, and Near Miss. The band was received with seemingly open arms, but realized that they were still a work in progress.

As time went on, BTS stayed in creative mode for the next few months, playing a few sporadic Chicago area shows in between, and made plans to begin recording their debut ?Near Life Experience? in early February 2003. During the final steps of the recording process, BTS was invited by Hopeless/SubCity Records to fill an open slot in the highly anticipated SXSW (South by Southwest) Music Festival that takes place every year in Austin, TX. Without hesitation, the band seized the opportunity immediately and put recoding on hold for that weekend. This would prove to be the best career move the band has made to this day.

BTS immmediatley clicked with the good people at Hopeless/SubCity, impressed them with a heartfelt and intense performance for SXSW, and stayed in contact. About 3 weeks later, they were offered to join the Hopeless roster.
Since then, the band has been up and coming worldwide, due to the hard work of the people at Hopeless and the bandmates themselves. The band took the golden opportunity to perform on the first week of the Vans Warped Tour '03 over the summer, shared the stage back home at Metro with melodic hardcore giants Rise Against (in which Precision was a founding member until 2001) and in Autumn were featured on the Vans Off the Wall tour with hardcore legends Sick Of it All, Boston street punk veterans The Unseen, the mighty Avenged Sevenfold, and other great bands such as Western Waste and Sworn Enemy. Since then, the band has released their debut full length titled ?Near Life Experience? in Feb 2004 and supported that with nationwide touring. The band also returned as sophomores to the 2004 10th Anniversary Warped Tour for 21 dates.

As of right now, the band is continuing to tour extensively, as well as craft and rehearse new material. They plan to tour nationally & worldwide (including the UK, Europe, and Canada), and wrap up the year with recording the new material for their second album for Hopeless Records.