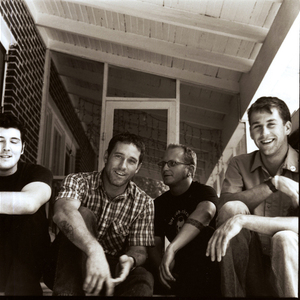 Hot Water Music is a Gainesville, Florida punk outfit known for Chuck Ragan and Chris Wollard's raspy vocals, as well as their searing Jawbreaker-esque guitars on earlier albums. The act first formed in 1993, and their first record, Finding the Rhythms, was released on No Idea and Toy Box records. Many fans commonly refer to Hot Water Music as the abbreviation, HWM. The name Hot Water Music comes from a Charles Bukowski book.

HWM recorded an album with their good friends and mentors Leatherface for the first volume of the BYO split series. They also recorded with Alkaline Trio for a split LP on Jade Tree shortly thereafter.

In 2001, Hot Water Music signed with Epitaph Records and released the record A Flight and a Crash, and went on to release two more records with Epitaph, Caution and The New What Next.

In 2005 the band took a hiatus as vocalist Chuck Ragan wanted to spend more time with his family. Soon after, the rest of the band formed The Draft, and released their debut record, In A Million Pieces, September 12, 2006 on Epitaph Records, along with various 7" vinyl records on No Idea. Ragan has opted for a solo-acoustic act with No Idea records, releasing a monthly vinyl to prelude a full studio album, as well as two live discs. As for Hot Water Music, No Idea is getting ready to release a b-sides disc later this year.

Members of Hot Water Music have been in various side projects, including Crows/artist], Rumbleseat and blacktop cadence

On October 22, 2007, music website Punknews.org reported that a reunion of the band is currently in the works.

The band kicked off their reunion tour with a "secret show" at Common Grounds in their hometown of Gainesville, Florida on January 18, 2008 to be followed by shows in Orlando, Florida, Sayerville, New Jersey and two sold out shows in Chicago, Illinois.
After that, they played at the Groezrock festival in Meerhout, Belgium in May 2008.

During 2009 Hot Water Music played a bunch of concerts in the U.S. plus a short german tour in november.

Till The Wheels Fall Off

The New What Next

A Flight And A Crash