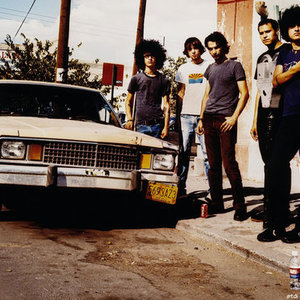 At the Drive-In is an American post-hardcore band from El Paso, Texas, active from 1993 to 2001. They were known for their extremely energetic stage shows which hearkened back to the 1980s hardcore scene. They were also recognized for their blend of surrealistic lyrics, unorthodox guitar melodies and unpredictable shifts in tempo and rhythm. Founded by Jim Ward (guitars) & Cedric Bixler Zavala (vocals - at the time a member of punk band, foss, in which he played drums). ATD-I's first studio recording was Hell Paso (Western Breed), an EP issued in 1994.

Founded by Jim Ward (guitars) & Cedric Bixler Zavala (vocals - at the time a member of punk band, foss, in which he played drums). ATD-I's first studio recording was Hell Paso (Western Breed), an EP issued in 1994. They would play their first show on October 15, 1994 at The Loretto Fair with Catch Okra, an El Paso music group, in El Paso, Texas. Much touring would quickly develop a following as intense in loyalty as the band was on stage.

The band was also very determined to get shows in their early days, even going to the point where they would pretend to be a polka chapel band to be put on a local television show called "Let's Get Real" in El Paso. At the Drive-In's reputation for energetic live performances outlasted their career, a faint hint captured on various live video recordings. It was this reputation, the release of perhaps their best-known album (Relationship of Command) and their small hit radio single "One Armed Scissor" (which had a music video in circulation on MTV) that contributed largely to the very positive attention they received in the rock press towards the end of their career. Spin Magazine named Relationship of Command one of their top 10 albums of that year, and in 2010 NME placed it number 12 in its top 50 albums of the decade. The bands first nationally televised performance was on FarmClub. A now defunct television show which aired late at night on the USA network. After that performance they also appeared on Later with Jools Holland, Late Night With Conan O'Brien and The Late Show With David Letterman, performing their single "One Armed Scissor" on national television. According to some sources, At the Drive-In struggled to recreate their intense live experience in the studio. At one point they tried to circumvent this problem by recording their second CD, In/Casino/Out (1998), as a live studio album; this was in contrast to the band's first album Acrobatic Tenement, which, although undoubtedly a hardcore punk album, lacked the energy seen in later works.

Not only notoriously energetic and wild at shows, At the Drive-In were noted by the music press for the afros of Cedric Bixler-Zavala and Omar Rodriguez-Lopez. The hairstyle became synonymous with the pair's image. However, the two have been very vocal about image. Omar said in one interview, "I hate photoshoots, I get so bored. The way I look has nothing to do with the music I make, so who cares if I have big glasses and an afro? People should just put on our CD."

In 2001, at the peak of their popularity and following a world tour, At the Drive-In broke up, initially referring to the split as an "indefinite hiatus."

Cedric Bixler took full responsibility for the breakup for the band, saying repeatedly in interviews that he felt almost as if ATDI were holding him back, and that he didn't want his music to be confined to 'punk' or 'emo' or 'hard-tits-core' - that it should encompass many different genres and be even more progressive, alternative, and "against-the-grain". Bixler and Rodriguez-Lopez had stated that they wanted their next album to sound like Pink Floyd's Piper at the Gates of Dawn, while the other members of the band were intent on progressing in a more typical rock direction. Following the break-up of ATDI, Omar and Cedric would start The Mars Volta. This project was a departure from their previous work, as it pursued the prog-rock sound that they had been interested in. Meanwhile, the other members of ATDI - Jim Ward, Paul Hinojos, and Tony Hajjar - would continue on to form the band Sparta. Hinojos has since left Sparta to join Bixler and Rodriguez in The Mars Volta as the Sound Manipulator (Keeley Davis has since become the new guitarist for Sparta). At the Drive-In's experimental and emotional work made them unique amongst their contemporaries.

De Facto (formerly De Facto Cadre Dub) was the alias for Cedric Bixler and Omar Rodriguez's reggae/dub side project since the early days of At the Drive-In. Essentially after ATD-I shows Cedric would play drums like he had in the El Paso Pussycat, Omar would play Bass as he did when he first joined ATD-I, and Ikey on keyboards back in El Paso, Texas (they relocated to Long Beach, CA in 2001). The group's ten-song full-length, Megaton Shotblast, appeared on GSL in late 2001. De Facto broke up when Jeremy Ward the vocalist (though there was little singing on their albums) and sound engineer died of a drug overdose in 2003.

The 9th January 2012 the band announced on twitter a message, with these words: THIS STATION IS ?NOW?OPERATIONAL. They will be playing the 2012 Coachella Music Festival.

At The Drive-In Was:

This Station Is Non-Operational