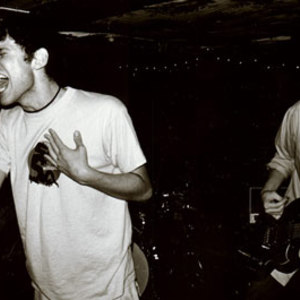 
Band Formation and Waiting
Thursday was formed in 1997 by vocalist Geoff Rickly, guitarist Tom Keeley, guitarist Bill Henderson, bassist Tim Payne, and drummer Tucker Rule, at which time the band began playing basement shows in New Brunswick and the surrounding tri-state area. The band played their first "official" show on December 31, 1998 in Rickly's basement alongside Midtown, Saves The Day and Poison the Well.

They recorded demos to hand out at shows and in the summer of 1999, teamed up with MP3.com for their first official release, the 1999 Tour EP that featured demos of songs that would be soon be found on their debut EP, Waiting, released December 6, 1999, on New Jersey-based Eyeball Records.


Full Collapse
Hesitant to join a larger label, but with full support from Eyeball Records, Thursday signed to Chicago, Illinois-based label Victory Records. The band's relationship with Victory Records would be a troubled one, as the band and the label rarely saw eye to eye. Thursday finished up their follow-up to Waiting, Full Collapse, but could not release it the way they intended; Victory Records claimed the band's lyrics were unimportant and not worth the extra packaging. Further, Victory Records created Thursday whoopie cushions for distribution at Warped Tour, an act that infuriated the band.

Full Collapse was released on April 10, 2001, without much radio or television support. The band toured in support of the album, but did not receive support from Victory Records. It was not until the band joined fellow New Jersey friends Saves The Day on a tour that Victory Records began paying notice to the band; without the band's consent they began marketing Understanding In A Car Crash as the band's first single, and released a video (comprised of live footage) that would receive airplay on MTV2. By this point, guitarist Bill Henderson had left the band to be replaced by Steve Pedulla.

After many tours and months of unhappiness, Thursday was nearing the end of their life as a band. Angry with each other (for reasons none of the band members could recount when asked later) and at Victory Records, the band recorded a song for the Five Stories Falling EP, the band's last release on Victory Records. Rickly has been quoted many times (at live shows and in interviews) stating that he and the band simply released that record to fulfill contractual obligations, and that fans should simply download the one new song that can be found on the disc.

The one new song found on the Five Stories Falling EP (released October 22, 2002) is Jet Black New Year, possibly Thursday's most popular song within the underground music community. The band has described the effort as a musical fight against each other, unable to communicate with one another in any other way. The lyrics draw from an experience that is documented in story form in the extensive liner notes found with the disc. Additionally, each of the other band members contributed a story (some factual, some fictional) to the liner notes.

In honor of this album's 10th anniversary, Thursday went on tour in 2011, playing Full Collapse in its entirety. Guests of the New York City, New Jersey, and Philadelphia, PA shows witnessed the guest appearance of Thomas R. Schlatter (ex-You and I, etc.), the original guest vocalist (screaming) recorded on the Full Collapse tracks Autobiography Of A Nation and Cross Out The Eyes.


War All the Time
Thursday parted ways in an unfriendly manner with Victory Records and joined Island Records. Their major label debut, War All The Time, was released September 16, 2003. The album's title, coupled with it being released approximately two years after the terrorist attacks of September 11, 2001, led many critics to believe it was a political album; Rickly has denied this on many accounts, instead claiming that he is speaking about love being a war.

War All the Time featured Andrew Everding on keyboards, though he would not become an official member of the band until December 26, 2003, when he was officially welcomed into the band at the band's now-traditional Christmas holiday shows held at New Jersey's Starland Ballroom, in Sayreville. Andrew Everding is originally from Syracuse, NY (The only member in the band not from New Jersey). Everding became close with Geoff Rickly after meeting through mutual friends in 2002, and after his house burned down in 2003 he decided to move to New Jersey to live with Rickly (in his parents home).

War All the Time received both praise and criticism; many felt that it did not live up to Full Collapse, an album that is often credited as being one of the most influential post-hardcore albums of the twenty-first century. The band has since stated that they felt rushed to write, record, and release the album due to the pressures of a major label. The entire writing and recording process took only six months; the band has claimed they almost forced themselves into a contained sound on the album.

The first song released off of the album was For The Workforce, Drowning released prior to their performance at Hellfest 2004. This song seemed to push Thursday further down the road that Jet Black New Year had started. Their performance at Hellfest, which included a cover of Far's Mother Mary featuring former Far lead singer Jonah Matranga seemed to be revolutionary. However, "For the Workforce, Drowning" turned out to be a one of a kind on their album.

The first single (and only single to receive full radio and television support) was Signals Over The Air, a song Rickly claims to be about the sexual revolution. A special radio edit version of this song exists, which removes part of the bridge near the end of the song. The UK single disc contains two extra songs: A Hole In The World (Acoustic) and Division St. (Acoustic).

The second single, the title track War All The Time, was released much later, but due to the video's controversial nature, never received much radio airplay or rotation on MTV. Thursday has said many times they are not sure what is so controversial about their video. The video contained no violent or sexual themes.

Thursday toured extensively to support War All the Time, taking their friends Thrice and Coheed and Cambria on a full US tour before joining AFI on another tour. During this time, Thursday performed many in-store acoustic sessions in places like Tower Records; Thursday also recorded live acoustic tracks for Y100 Sonic Sessions, a radio program on the now defunct Philadelphia-based radio station, Y100. The live acoustic version of single "Signals Over The Air" was used on Y-100: Sonic Sessions, Volume 8.

Thursday also performed at the Apple Store in New York in October of 2003, which was recorded as a live acoustic session split release with Thrice called Live At The Apple Store, who played the same day at the Apple Store in LA. Those recordings were issued exclusively through iTunes. A promotional EP, Live in Detroit, was released late in 2003 through Revolver magazine.


A City by the Light Divided
Rickly began to become sick quite often on the road; the band did not always get to finish their entire show, especially during the European leg of the tour. This, in addition to nonstop touring and creative issues within the band, forced the band to go on an indefinite hiatus in 2004.


Kill the House Lights
The band parted ways with Island Records in early 2007. They cancelled all tour plans until their fall tour with Circle Takes the Square and Portugal. The Man in support of Kill the House Lights, a DVD/CD retrospective. At their 2007 New Year's Eve show at the Starland Ballroom, the band announced that they will be writing and recording new material in 2008.

Split album with Envy
Thursday announced on April 2, 2008 via a MySpace bulletin and their official website a new split album with Japanese post-hardcore band, Envy.
? We've decided to convert rumor into fact and lay it all out for all you good peoples. New Jersey's Thursday and Old Tokyo's Envy will come together to release a split LP+CD this fall, released by Temporary Residence Ltd. It will be a limited edition LP+CD set; there will be no separated CD or LP versions. Both formats will come in one package, and both will contain the same music. This means it may not be available in Best Buy, Wal-Mart, Circuit City, or most 'record' stores in the mall. But it will certainly be available at your local independently owned record store, while supplies last. We're not yet sure how limited it will be; maybe 10,000, maybe a billion (probably closer to the former, as we really don't have space for a billion LPs). In addition, there will be a deluxe, hand-printed edition that will be sold exclusively through our webstore. These will be screenprinted by hand, and will be limited colored vinyl editions. There is no specific release date set yet, but look for this around Sep/Oct.?

The album was released on Temporary Residence Limited on November 4th, 2008.

Common Existence
The band announced on September 30, 2008 that they'd signed with Epitaph Records. Regarding their new label, the band said the following: "It's a great feeling to have a label encourage you to be more socially conscious and politically active."

Thursday have finished recording and mixing their full-length album entitled Common Existence which was released on February 17, 2009 under Epitaph Records. In a March 2009 interview, Rickly explained the album's title refers to humanity's shared experience, and that many of the songs were influenced by the words of his favorite poets and authors.
? Almost every song on the record is connected to a different writer. The first song, "Resuscitation of a Dead Man" is influenced by Denis Johnson's Resuscitation of a Hanged Man. Another song is based on a book [Martin Amis'] Time's Arrow. The whole record also has a lot of themes from Roberto Bolano, a poet who wrote The Savage Detectives and a few other things. The song "Circuits of Fever" is very influenced by [writer] David Foster Wallace[/writer]. ?


On November 22, 2011, Thursday announced their plans to disband, following a string of shows during the holiday season. They performed their last show on March 05, 2012.


Other Projects
Geoff Rickly is currently working on a side project called United Nations. This is a collaborative effort with many other artists, rumored to include: Daryl Palumbo (Head Automatica, Glassjaw), Chree (The Number 12 Looks Like You), Cooper (Made Out of Babies) and Thursday's Guitar tech, Josh Mihlek.

Former
Bill Henderson ? guitar and backing vocals on Waiting (Member of The Procedure, Purpose, X One Way X and Between the Wars)

A City By The Light Divided

War All The Time