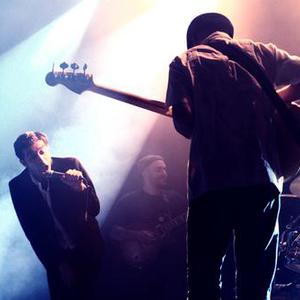 Glassjaw is a highly influential post-hardcore band from Long Island, NY. They formed in the summer of 1993 after Palumbo and Beck met each other at camp. They recorded some demos before releasing the EP "Kiss Kiss Bang Bang" in 1997, and recorded their first full length album "Everything You Ever Wanted To Know About Silence" in 2000 on Roadrunner Records. The record brought the band out of Long Island and into the hands of a dedicated grass-roots following.

The band has been influential in the progression of the underground music scene in the eastern United States and United Kingdom and on the post-hardcore genre, and are known for their intense live shows and constant line-up changes.

In 2005, all members spare Palumbo and Beck left the band for reasons which remain unclear. It is supposed that they left involuntarily. Ex-drummer Durijah Lang and ex-bass player Manuel Ragoonanan Carrero were soon inducted back into the band, so there was once again a functional lineup for playing shows. Indeed, the new four-piece Glassjaw played a handful of shows in Summer 2005. A new album was apparently in the works for a release in 2007, but never surfaced.

Daryl Palumbo also fronts electronic pop-rock band Head Automatica, and ex-Glassjaw drummer Larry Gorman also played for them; however, Gorman is no longer a member of the band for unknown reasons.

After a two-year hiatus, the band played three shows in 2005, two at the now-defunct The Downtown in Farmingdale, NY, with proceeds going to charity, and a spot on The Used's tour at the Hammerstein Ballroom.

After some mysterious updates on their website, the 2007 Glassjaw tour had gone and ended, already hitting up spots including yet another venue in Farmingdale, NY, playing 2 shows in one day at The Crazy Donkey.

Glassjaw's next album is highly anticipated, not only due to their last full-length release dating back to 2002, but also the delay and lack of information regarding its status and/or release. In an interview with Palumbo in the July, 2006 issue of AP magazine, he stated that the band were in the process of writing and recording new material for the next album, which they hoped to release in 2007. Palumbo hinted that there could be a unifying concept behind the album. In November, 2007, in the first Glassjaw interview in years, Beck revealed they had written "about eleven good songs -- seven i love, and four to six half-baked ideas we need to finish".

In an interview with Kerrang!, Palumbo stated that the new album should be released by "The end of this year or early 2009...I hope." Details emerged from The Grixer in May, 2008 that the album was "awaiting vocals" and "should be wrapped up and completed in the coming months". In a May, 2008 interview with Verse One magazine, Beck said: "Right now I'd just be happy to finish up this record. I'm sure if it's not a giant pile of shit, we'd love to play it live. Exact dates, plans, don't know yet." In a June, 2008 interview conducted by Glassjaw.net, Beck stated, "As far as I am personally concerned, there will be a release well before the end of the year."

On August 6?8, 2010, the band released a 7" vinyl single for "All Good Junkies Go to Heaven" spraypainted green and pink on either side of the vinyl at the UK's Hevy Fest. This is the first official Glassjaw release since 2005's [album artist=Glassjaw]El Mark EP[/album. On August 8, 2010 via MerchDirect, "All Good Junkies Go to Heaven" became available for purchase. Within hours of availability, the vinyl had sold out. Shortly thereafter, in addition to the launch of the single, a "one-take" live video of their 2008 song "You Think You're (John Fucking Lennon)" was posted on the official Glassjaw website. On September 8, Glassjaw announced the release of another vinyl single for release on September 9, 2010 for the song "Jesus Glue", as well as a digital download for "All Good Junkies Go to Heaven" in various formats. On September 23, GlassJaw posted a video for the song, "Stars", a reworked version of "Star Above My Bed", a fan favorite. As they did with "Junkies" and "Jesus Glue," October 10 saw the release of yet another vinyl, "[album artist=Glassjaw]Natural Born[/album] Farmer" and the digital release of "Jesus Glue."

At 11:11AM on January 11, glassjaw.com began streaming a studio recording of "Gold". The website's background was changed to a live band photo with the text "coloring book, the extended play. available exclusively at venue. gratis." After the first concert on their 2011 tour, February 13, 2011, the new EP [album artist=Glassjaw]Coloring Book[/album] was given away free to each fan that attended the concert. Glassjaw played two shows in the UK, at the London HMV Forum (March 30) and the Cardiff Solus (March 31), with support from Napalm Death and also headlined Soundfest (June 10), playing alongside other artists such as Brother Ali, Del the Funky Homosapien and If He Dies He Dies. The band also played the Radio 1 / NME Stage at Reading and Leeds Festival in August 2011.

Glassjaw played their first and only scheduled show so far in 2012 in support of Rise Against's [album artist=Rise Against]Endgame[/album] tour. It was the only show Glassjaw opened for them on the tour. A Day to Remember, The Menzingers, Architects, Touch&eacute; Amor&eacute;, and Title Fight are also supporting selected dates. Glassjaw have been added to the Sonisphere festival line-up and will perform Worship & Tribute in its entirety during their set. However, it was announced on March 29, 2012 via Sonishere's website that the festival was canceled due to issues in setting up the festival. As a result, the band have scheduled a date at New York's Irving Plaza to play the album in its entirety. The band have also been announced to be playing Hevy Festival 2012, alongside acts such as Converge, Rolo Tomassi and Will Haven. This will mark Glassjaw's second time playing at the festival, and the first since headlining it in 2010.

Our Color Green (The Singles)

Everything You Ever Wanted To Know About Silence