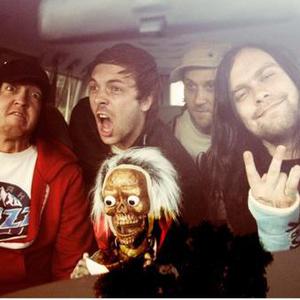 The Used is an American alternative rock/post-hardcore band from Orem, Utah. Their sound has been classified under many sub-genres of rock. They signed with Reprise Records in late 2001 and rose to fame in June 2002 after releasing their debut self-titled album, The Used. Soon after a CD/DVD package named "Maybe Memories" was released containing unheard demos and a "behind the scenes" story of the band/band's past.

They followed up with their second album, In Love and Death, in September 2004 and their third album, Lies For The Liars, in May 2007. An EP, Shallow Believer, was released in February 2008 that featured most of the band's B-sides to date. They spent the entire year of 2008 working on their fourth studio album, Artwork, which was released September 1st, 2009. The band has achieved both Gold and Platinum statuses in over 6 countries worldwide. Speaking with Songfacts
in a 2012 interview, The Used bassist Jeph Howard said that "A Box Full of Sharp Objects" is probably his favorite song by the band.

A few years ago, while preparing to send the album art for b-side collection Shallow Believer to his record label, Bert McCracken scrawled the word ?Artwork? across its cover in silver ink. The sentiment, which, to Bert and his bandmates in The Used, resonated with both extreme simplicity and indescribable complexity, said everything without really having to say anything. Now, the Utah band has titled their fourth full-length album with that very word: Artwork.

The group started writing the album after finishing the Taste of Chaos International tour in 2007, slowly collecting and jamming out ideas with no concrete intention beyond making the songs as dirty as possible. The Used, whose last album, 2007's Lies For the Liars, debuted at No. 5 on the Billboard Top 200, spent the first half of 2008 in LA exploring and refining these ideas, eventually piecing tangential riffs and melodies into a scattering of songs that contained a surprisingly cohesive sensibility. The band members dubbed the music they were writing ?gross pop,? their own new genre of hook-laden numbers that pushed the boundaries of the grotesque. Tracking for the album began in June of 2008 with producer Matt Squire and eventually concluded in February of 2009, primarily at LA studios The Lair and NRG. Between a few sporadic tours, the band spent about three months total recording with Squire where they allowed their creativity to dictate when they worked on something.

?I wouldn't say it was hard to make any of the record but it definitely was time consuming,? Bert says. ?We worked on our time table. The band allowed me to create when I was able to create, which was a good thing. I didn't feel pressure to force things. There was no specific time I had to do anything. If we were in the studio and I'd been working on lyrics for five hours and nothing came out, we would just try again tomorrow.?

In the studio Squire approached the recording process with a laid-back attitude the band both appreciated and needed. The decision to work with a new producer after establishing a longtime relationship with producer John Feldman, who was at the helm of the band's past three albums (Lies For the Liars, as well as 2004's In Love and Death and 2002's The Used, both of which were certified gold), was derived from a simple desire for change. The Used wanted to see what would happen if they entered the studio with someone different, a process guitarist Quinn Allman compares to ?breaking up with your girlfriend not because you don't love her but because you need to try something new.?

?It wasn't that we absolutely didn't want to work with Feldman or that we absolutely wanted to work with Squire,? Bert explains. ?It was more that the band needed a change. We wanted to try something different and have it sound a lot different. It took a few weeks for us to get a vibe for each, but once we got used to it, it was really easy. Squire brought in this willingness to try anything and an open mind and a good attitude. I feel like he was really in touch with what the band wanted to do and he was really supportive of our ideas.?

The result is a raw collection of twelve songs that not so delicately teeter the line between being aggressively discordant and charmingly hooky. The first single ?Blood On My Hands,? which Quinn describes as the song that ?sums up everything about The Used,? is confined chaos, brutally thrashing one moment and proffering a pop-driven, sing-along chorus the next. ?Empty with You,? a track Bert says is ?about feeling empty and lonely but as long as you have someone who can feel lonely with you then everything's okay,? surges with passion and gripping honesty, while ?Cut Yourself? balances the album's predilection for propulsive rage with its quieter, piano-driven exploration of what it means to have someone to lean on.

?This record is more sincere,? Quinn says. ?It's got a sound more reminiscent of the first record. Lyrically, it completely engulfs you and makes you feel safe but it's all about feeling alone and empty and knowing there's always a light. If you're frustrated that much it means you care that much. The lyrics carry you through the record and you're right with Bert and where he's at. The music isn't showing off. It's just being what it is. I think the fans will appreciate all that.?

Artwork encapsulates the past eight years of a band that's played tours and festivals like Warped Tour, Ozzfest, Projek Revolution, Give It a Name, Reading and Leeds and SxSW, and sold over two million albums in the States alone, while simultaneously urging them forward. It's a collaborative effort that drew The Used closer together during its creation. It's about love and mortality and the basic human emotions we all experience every day. It's biting and gritty, and it's melodic and catchy. It's a new chapter for a band that's constantly sought to redefine the bounds of pop music?and have always successfully done so. It's a reminder, as Bert says, ?we're all artists creating our own art just by living it.?

?I Come Alive? is the first single from The Used's fifth album, Vulnerable. It is the first release on the band's own label, Anger Music Group, an imprint of Hopeless Records. The song was released on January 17, 2012. (I Come Alive Songfacts).

Live & Acoustic At The Palace

The Ocean Of The Sky (EP)