From First To Last 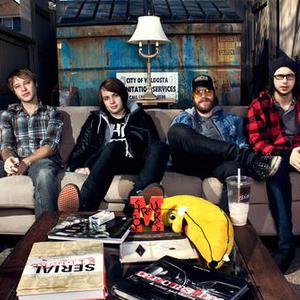 In 2002, From First to Last was formed by guitarist Matt Good and Travis Richter in their hometown of Valdosta, Georgia. Eventually a solid lineup was formed, with vocalist Philip Reardon, guitarist Richter, guitarist Good, bassist Joey Antillon and drummer Derek Bloom. In 2003 The band released the EP Aesthetic on Four Leaf Recordings. At the time, Bloom had been with the band a few weeks and most of the singing was done by Good and Richter as they had provided vocals since the band had formed, where Reardon provided the screaming. By the end of 2003, From First to Last signed to Epitaph.

After the Aesthetic EP, Reardon was asked to leave the band for various reasons and Antillon was replaced by Jon Weisberg after he was arrested for shoplifting and unable to tour. The rest of the band members originally decided to have Good as the lead singer, but he opted to concentrate on guitar, not wanting to give it up in order to take on lead vocals. Good had wanted From First to Last to have a frontman, in order to connect with the crowd better. Using the social networking site MySpace, Good came in contact with a guitarist from California by the name of Sonny Moore. Moore flew out to Georgia, where the bands second album Dear Diary, My Teen Angst Has A Bodycount was being recorded, and was set to be the band's second guitarist. However, when the other band members heard Moore singing backups, they decided that he was much better suited for lead singer than guitarist.
Good and Richter wrote the album in two weeks and Moore, coming in after the music was tracked, completed the vocals with the bands help. Dear Diary, My Teen Angst Has a Body Count was released on June 29, 2004.

In 2005, from late May to mid June From First to Last participated in the "Dead by Dawn" tour with bands Emanuel, Halifax and He Is Legend.

From mid March to mid May 2006 the band toured along side Fall Out Boy and The All-American Rejects for the "Black Clouds and Underdogs Tour" in support of their release Heroine.
Prior, the band went to Radio Star Studios in Weed, California to record their second album, produced by Ross Robinson. As their previous bassist Weisberg had been formally asked to step out due to issues within the band's relationship, producer Ross Robinson asked Wes Borland, (currently of Black Light Burns,former Limp Bizkit guitarist, to play bass on their second full length Heroine. He later played several tours with the band. The album was released on March 21, 2006 and opened on the Billboard albums chart at #25, with first-week sales of 33,000-plus. Shortly thereafter in April, they signed to major label Capitol Records after bidding between Capitol Records and Warner Bros.

Meanwhile, singer Sonny Moore began to have problems with his vocal chords. From First to Last went on the "World Championship Tour" supporting Atreyu along with Every Time I Die and Chiodos. That is when new bassist Matthew Manning joined the From First to Last line up. While on that tour, Moore had vocal cord problems and had to leave the tour. The band had planned to have guitarists Good and Richter cover Moore's vocal duties for the duration of the tour until singer of Chiodos, Craig Owens, insisted that he provide lead vocals for their sets. Atreyu eventually dropped From First to Last from the tour. The band later explained, "Our plan to enable us to play the rest of the tour was disregarded and as our crew was setting up for the show in Worcester, MA we were informed that we were being kicked off of the tour. Understand that it was not our choice to leave this tour...we were forced to leave." Atreyu then returned a statement about the controversy concerning From First to Last's departure, saying, "They couldn't perform as FFTL and are no longer on this tour."

In February 2007, Moore left From First to Last to pursue his solo career. His decision to leave was based on his urge to create his own music, and also on the fact that singing in FFTL was putting an immense strain on his vocal chords. Sonny has posted new recordings on his MySpace and has recently signed onto a label, modernorganic.

After vocalist Moore's departure, FFTL faced a crisis. Their label, Capitol Records, had dropped them due to financial problems. Without a vocalist, label, permanent bassist, or any money, the band almost split. Guitarist/Vocalist Matt Good, however, decided to take on lead vocals while still providing a backup guitar role. The band also quickly picked up Matt Manning to become full-time bassist .The band then spent their remaining money on a studio in which to continue work on their already-written third album.

After completing a full mix of their new material, FFTL was picked up by Suretone Records. Shortly after they re-entered the studio to record their album again, this time with a professional crew and better quality. This was part of the reason that there was so much delay in the release. The album was supposed to be out April 19, "Just in tiume for the High-lidays" as put by the band's merch guy, Ricky Terror. Then it was postponed up till May 6th.
The band recorded for the second time in Los Angeles, with producer Josh Abraham and seasoned engineer Ryan Williams. They have since completed the album, and at midnight on November 14, 2007, they released a new song, Two as One, on their MySpace account.

After RATHER BE SLAYIN' N00BZ, the band joined Every Time I Die, The Bled, August Burns Red, and The Human Abstract on Hot Topic's Take Action Tour.

On January 23rd 2008, one of the songs from the new album, We All Turn Back to Dust, was released exclusively through Billboard.com. On February 12th, From First to Last released an exclusive 2 song CD through Hot Topic. The CD features the songs "We All Turn Back to Dust" and "I Once Was Lost But Now Am Profound" from the band's Self Titled album. On March 7th, it was confirmed that "Worlds Away" would be the album's first single. It hit radio on March 17th. The Video Debuted on AOL.

The new album received mixed reviews. With Sonny no longer in the band many people felt that From First to Last had lost their unique sound. Alternative Press magazine had reviewed their self titled album poorly, giving it a meager 2 stars, accompanied with a biased review. This had upset many other fans feel that they are better without him, or just the same.

A special edition of From First to Last's self titled is available through Hot Topic and it includes the extra track "Everything's Perfect." A more up tempo song reminiscent of their Dear Diary Days. The Japan editions include and extra track, "World's Away Acoustic." The European versions include "Tick Tick Tomorrow Acoustic" and "Medicinal Reality Acoustic." Aside from all these extra tracks, they covered "Chelsea Hotel" by Leonard Cohen and had it available to listen on myspace.

From First to Last plans to spend most of 2008 on the road, including a headlining slot on the Warped Tour. They have been documenting their tour life on FFTLTV, a series of videos with a new episode every week, released on Tuesdays via their youtube.

The band has a contract with EA games and will have certain songs featured on games like Facebreaker, which features Worlds Away, and Command and Conquer: Red Alert 3, for which they covered the "Hell March" theme by Frank Klepacki.

Derek Bloom and Travis Richter have a side project called The Color Of Violence.

Throne To The Wolves

From First To Last

Dear Diary, My Teen Angst Has a Bodycount