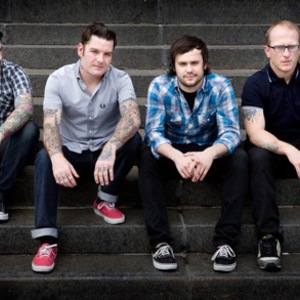 Senses Fail are a post-hardcore band formed in New Jersey in 2002. The band's original lineup consisted of James "Buddy" Nielsen, Dan Trapp, Dave Miller, Garrett Zablocki, and Mike Glita. The band released their debut EP From The Depths Of Dreams with a limited 300 copy run on August 13, 2002, through ECA Records. It was then reissued through their new label Drive-Thru Records on April 29, 2003 with two bonus tracks, "Handguns and Second Chances" and "The Ground Folds (Acoustic)." Two years later their debut album Let It Enfold You was released, on September 7, 2004, through Vagrant.

This album had two popular singles, Buried A Lie and Rum Is For Drinking, Not For Burning - music videos were recorded for both songs.

In 2005 guitarist Dave Miller left the band and was replaced by Heath Saraceno, formerly of Midtown. The band's second full-length album, Still Searching, was released in 2006. They joined Warped Tour and Taste of Chaos in support of the album. Mike Glita then left the band the following year and Jason Black, also a member of Hot Water Music, joined initially as a temporary replacement but ended up remaining in the band. Their third album, Life Is Not A Waiting Room, was released in 2008. Heath Saraceno then left the band after their appearance at the 2009 Warped Tour and was replaced by Zack Roach, also guitarist of post-rock band Spirit of the Stairs.

Senses Fail's fourth album The Fire was released October 25, 2010 through UK label Hassle Records and elsewhere through Vagrant the following day. In February 2011, Garrett Zablocki left the band to attend college and was replaced by Matt Smith, also guitarist for Strike Anywhere.

Hell Is In Your Head

If There Is Light, It Will Find You

In Your Absence (EP)

Pull the Thorns From Your Heart

Life Is Not A Waiting Room (European Edition) (Bonus Tracks)

Life Is Not A Waiting Room