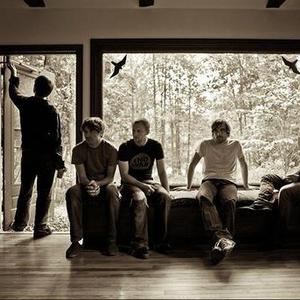 Circa Survive is an alternative rock band consisting of former Saosin vocalist Anthony Green and members of the now-defunct This Day Forward, including guitarists Brendan Ekstrom and Colin Frangicetto. Compared to the sound of Green's former group, the music of Circa Survive taps a different musical influence for Green, who cites Paul Simon, dredg, and Bj&ouml;rk among later artists who have more influence on his vocal stylings in Circa Survive which are comparatively less aggressive, as well as his songwriting.

After going back to his hometown of Philadelphia, Pennsylvania, USA in 2004 for a dental appointment, Anthony Green went back to the airport to return to California and his Saosin mates. However, he suddenly had an epiphany - that despite the fact that Saosin was close to breaking out, he knew he would be miserable if he returned. To him, Saosin was "a girl that you had great sex with, yet had little in common with," as Green himself affectionately said. He returned to Colin Frangicetto, a friend who he had "jammed" with during his stay, and they decided to begin recording and recruiting. Thus, Circa Survive was born.

Colin Frangicetto and Anthony Green, with full support from Equal Vision Records, then recruited Brendan Ekstrom. Ekstrom had been Frangicetto's bandmate in This Day Forward. Both Ekstrom and Frangicetto had toured with Taken during their This Day Forward days, and procured Nick Beard, previous bassist of Taken, as Circa Survive's next member. The band met Steve Clifford through Vadim Taver of the band Marigold; "[Steve] jammed with us for a week and from there it was on," says Frangicetto.

To date, Circa Survive has released two versions of the song "Handshakes at Sunrise" on two different 2004 sampler discs from Equal Vision Records, as well as a 2005 limited edition tour EP called The Inuit Sessions. A full length album Juturna was released April 19th, 2005.

Circa Survive now has many national tours under their belt, including a co-headlining tour that took place in summer 2005. Circa Survive has also opened for Mae and dredg on each of their headlining runs. Circa Survive played The Bamboozle Festival in New Jersey in 2005, and then played every year until 2008. They also played a few dates on The Van's Warped Tour in 2005 and completed a European tour with Coheed and Cambria and Thrice in 2006. Circa Survive has also toured with Thursday, Rise Against, Billy Talent, My Chemical Romance, Saves The Day and Moneen.

Circa Survive's first major headlining tour occured during the summer of 2006, with The Receiving End Of Sirens, Youinseries, and Days Away on the first leg of this tour. These bands dropped off on July 23rd. On July 25th, Portugal. The Man, and Keating joined the tour.

On Letting Go is the band's second album. It was released on May 29, 2007 by Equal Vision Records, the album debuted at number 24 on the U.S. Billboard 200, selling about 24,000 copies in its first week. The band headlined the Alternative Press Tour in Spring 2007, with, Cute Is What We Aim For, Envy on the Coast, and As Tall As Lions, headlined the 2007 Warped Tour, and did a headlining tour with Ours, Fear Before The March Of Flames, and Dear and the Headlights in the fall.

After supporting Thrice and Pelican for their Spring 2008 tour, Circa Survive returned home to Philadelphia to write for the follow up record to On Letting Go. The band announced in August of 2009, after over a year of writing, that they were beginning the recording process, and that they had signed with Atlantic Records. The band frequently spoke of the new material as a brand new direction and, as Colin said, "our growth is evident in every note and rhythm I hear."

Circa Survive is planning to record their fourth LP between mid-March and May 2012 in California with former Failure frontman Ken Andrews (Mae, Pete Yorn) as producer. It is tentatively scheduled for release in late summer or early fall 2012 on Atlantic Records, with a U.S. tour to coincide with its release.

On April 16, 2012, Circa Survive began recording their fourth record. On March 5, 2012, Absolute Punk stated it would be titled "Violent Waves". On June 25th, 2012, Circa launched the Violent Waves Pre-Order webpage, officially announcing the album's title and release date, August 28th, 2012, along with a new song titled "Suitcase". The band also confirmed that the CD would be self-released.

A Dream About Death (EP)

A Dream About Love (EP)