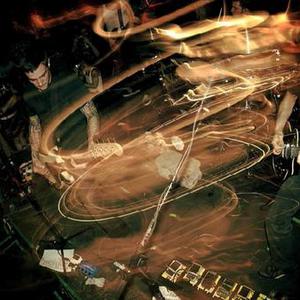 Cave In is a rock band that formed in 1995, in Methuen, Massachusetts. The band consists of Stephen Brodsky (vocals, guitar), Caleb Scofield (vocals, guitar), Adam McGrath (guitar) and John Robert Conners (drums). Beginning as a metalcore band, the group changed their style to an amalgam of progressive rock, space rock and alternative metal with subsequent releases. The group's early work on Hydra Head Records was more extreme and chaotic in the style of bands like Converge and The Dillinger Escape Plan, but their later output appears to be influenced by a wider range of styles.

The group's early work on Hydra Head Records was more extreme and chaotic in the style of bands like Converge and The Dillinger Escape Plan, but their later output appears to be influenced by a wider range of styles. Their 2003 album Antenna (released on RCA Records) has had more success than previous albums and enabled the band to play the second stage on the 2003 Lollapalooza tour. However, playing Lollapalooza didn't garner the band enough financial success to prevent them from being dropped from RCA Records' roster. Although the albums before Jupiter had alluded to melodic yearnings within the group, the throat injuries of lead vocalist Stephen Brodsky clinched the band's decision to move forward with the group's present, more euphonious sound and abandon their metalcore leanings.

Most of Cave In's recent material can be categorized as space rock, using themes centering around space. Examples of this are the songs Jupiter and New Moon, album names Jupiter and Antenna, and the band's singular brand of resonating ambient "spacey" guitar effects they incorporate into their songs.

John-Robert has since departed from Cave In and has been replaced by drummer Ben Koller, who will balance drumming duties in Cave In as well as his primary band, Converge.

In November of 2006, Cave In officially went on hiatus.

On April 28th, 2009, Cave In posted a blog on Myspace saying "Our three year hiatus has officially ended," and are playing their first show in three years in Boston on July 19th, 2009. The band has also announced a new EP, titled "Planets of Old", to be produced by Paul Q Kolderie (The Pixies).