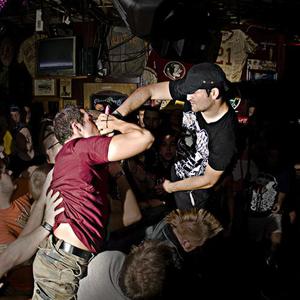 Poison the Well is an experimental hardcore band from Miami, Florida that formed in 1997. They are currently signed to Ferret Records. Guitarist Ryan Primack and drummer Chris Hornbrook are the only remaining members of the band who have been involved since their first album, although vocalist Jeffrey Moreira has been the singer on all five full-length albums. History Poison the Well was originally named "An Acre Lost" and was started by original singer Aryeh Lehrer and original guitarist Ryan Primack.

History
Poison the Well was originally named "An Acre Lost" and was started by original singer Aryeh Lehrer and original guitarist Ryan Primack. Shortly after their first release as "An Acre Lost", a 12" split with Promise No Tomorrow on Ohev Records, the name of the band was changed to Poison the Well. Poison the Well released their first album Distance Only Makes The Heart Grow Fonder in 1998. The album gained them the attention of Trustkill Records who signed them to a multi-album deal. PTW released their first album with Trustkill in 1999, The Opposite of December... A Season of Separation. Trustkill has a strong underground following in the United States, and popularity and some success was achieved. To this day, Guitar World magazine still dubs "The Opposite of December..." one of the greatest hardcore albums of all-time, ranking number 8.

"The Opposite of December..." caused a stir in the music scene and was starting to gain the band the attention of some Major labels. The album was successful enough that the band re-released Distance Only Makes The Heart Grow Fonder on Undecided Records with two live bonus tracks and a slightly different title (they dropped the "Only"). Afterward, the band released one more album on Trustkill, Tear From the Red, and released a video for the song "Botchla". The popularity of the album grew and the band was signed by Atlantic Records. In 2003, a year after the release Tear From the Red, the band made their major label debut with You Come Before You.

Due to losing two members, Jason Boyer on Guitar and Ben Brown on Bass, Poison the Well announced that "Mike MacIvor formerly of Candiria and Brad Clifford of Since by Man will be filling in for live duties on Bass and Guitar".

Poison the Well released "Letter Thing" as a digital-only single on March 13, 2007. The single is available via iTunes and all other download platforms. A video has also been released, with Roboshobo (The Blood Brothers, Mates of State) handling directorial duties.

Poison the Well's fourth full length Versions was released on Ferret Music on April 2, 2007 in Europe and April 3, 2007 worldwide. On February 22, 2007 they began touring in support of the album.

In mid 2008, the band took a break from major touring, with scattered shows in Alaska, Canada, South America, and Florida. Poison The Well used up the rest of the year to write a follow-up to Versions.

Their fifth full length album, The Tropic Rot, was released digitally on May 24, 2009 and physically on June 16, 2009 through Ferret Music.

Former member Derek E. Miller is currently one half of the indie duo Sleigh Bells.

You Come Before You

Tear From The Red

The Opposite Of December