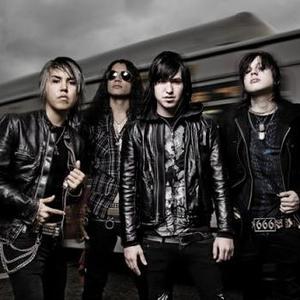 Escape the Fate is a post-hardcore band which formed in 2005 in Las Vegas, Nevada, United States. The band currently consists of Craig Mabbitt (vocals), Bryan "Monte" Money (guitar, keyboards, vocals), Max Green (bass) and Robert Ortiz (drums). Their self-titled third studio album was released on November 2, 2010, first on the major label, DGC/Interscope, and their most successful album to date.

In September 2005, Escape the Fate had won a local radio contest judged by My Chemical Romance. The gig awarded them the opportunity to open a show on the band's headlining tour with Alkaline Trio and Reggie and the Full Effect, which subsequently led to Escape the Fate's record deal with Epitaph.

On May 23, 2006, the band released their debut EP titled There's No Sympathy for the Dead. The EP included two songs that were later on their full length album, Dying Is Your Latest Fashion. The EP was produced by Michael Baskette and helped earn the band attention from record labels and fans alike. After the EP's release, keyboardist Carson Allen left the band to join On the Last Day.

On September 26, 2006 the band released their first full-length album, Dying Is Your Latest Fashion.

In 2007, during the Black on Black tour, rhythm guitarist Omar Espinosa left the band due to personal issues.

Ronnie Radke was asked to leave the band after he was sentenced to prison in June 2008 for multiple run-ins with the law involving narcotics and battery for a fight that led up to the death of Michael Cook. As stated by Max Green, "First we couldn't tour out of the country, then out of the state."

After the departure of Radke, former Blessthefall vocalist Craig Mabbitt joined the band, first as a temporary replacement, and then as a permanent member.

This War Is Ours was released on October 21, 2008. It included the singles "The Flood", "Something", "10 Miles Wide", and "This War Is Ours (The Guillotine II)". It was the first Escape the Fate album featuring Craig Mabbitt as the vocalist.

Escape the Fate announced via a MySpace bulletin that they would film a video for "This War Is Ours (The Guillotine II)" on January 9, 2010. It was filmed at the Yost Theater in Santa Ana, California.

On February 15, 2010, Epitaph Records announced the re-release of the This War Is Ours album in deluxe CD/DVD edition. The CD includes two new never before heard songs, later identified to be "Bad Blood" and "Behind the Mask", an acoustic version of "Harder Than You Know", and an unreleased remix of "This War Is Ours (The Guillotine II)" called "This War Is Mine", remixed by the Shawn Crahan. It also came with a DVD that featured the new music video to "This War Is Ours (The Guillotine II)", as well as "Something", "The Flood", and "10 Miles Wide". It also comes with a world tour documentary and a behind the music feature. It released April 27, 2010.

In an interview during Warped Tour 2009, Max Green stated that the album will feature a song co-written by Mick Mars of M?tley Cr?e, who approached Escape the Fate to collaborate on some songs, but later was revealed that they decided against putting the song on the album and saving for a future release.[9]

Starting July 24, 2010, they set off on tour for South and Central America, the country's toured are Brazil, Argentina, Colombia, Chile, Colombia and Venezuela.

On July 26, 2010, Escape the Fate announced via MySpace some new updates on the album. They officially said that the new record will be released through major record label, DGC/Interscope, and produced by Don Gilmore (Linkin Park, Bullet For My Valentine, Hollywood Undead). Its release was set for November 2nd, 2010. Max Green commented on it, saying, "This record is the cure for the modern day music epidemic, We are wiping the slate clean and re-writing rock music as you know it.? Escape The Fate were set to take on a United States, Canada, and Europe tour prior to release of the album, with Bullet For My Valentine, Drive A and Black Tide, but later forfeited their spot due to Max Green admitting to rehab.

On August 31, 2010, the band released the album's first single, "Massacre." Their second single, and first official one to be released to radio stations, "Issues", from the self titled album, Escape the Fate, leaked via KROQ Radio on the 9th of September, and later officially released the single, "Issues", on September 15, 2010. The music video of "Issues", premiered September 28 on Youtube. December 21, the next single released was "City of Sin" with a music video for it on Youtube.

On January 11, 2011, the band performed live in "Tues Show" (Fuel.tv) the song "Issues" and "Gorgeous Nightmare" with the special collaboration of Kevin Thrasher (of Lovehatehero). On June 15, 2011, the band release a music video for their next single off the self-titled album, "Gorgeous Nightmare". The video was directed by Robby Starbuck, who has previously worked with Asking Alexandria and Silverstein. On August 19, 2011, the band announced via Facebook that Monte Money would be taking a break from touring but will still be in the band. Kevin Thrasher, who has worked with the band in the past, will be substituting for Monte. It was also announced that Max Green returned to the band after taking a break through the first half of 2011 to recover from his addiction with drugs through rehab. ?I'm feeling great and am glad to be back with my band. Escape The Fate is my life. This is where I belong.?, Max Green said. After they played a couple of shows on the 2011 Uproar Festival, Max, again, left the band and Zakk Sandler, from Black Tide (who was also playing Uproar), filled in for him.

In mid-December 2011, the band re-entered the studio to work on the production of their fourth album. The album will be produced by John Feldmann and is scheduled for release some time in 2012. It is currently unknown if Max Green has returned to the band to play bass on the upcoming album or if the band hired a new bassist. However, there is much speculation as to former Motionless In White and current Get Scared bassist TJ Bell will be taking over on bass due to the band tweeting pictures of him recording in the studio, plus his recent touring history with the band filling in for Max Green.

On December 27, Craig Mabbitt posted on his official Facebook page that he will be recording music for his new side-project all through January 2012 and recording for Escape the Fate all through February. He commented that since they are recording with John Feldmann again, who they worked with on their second album,This War Is Ours, the style of the upcoming album will be similar to This War Is Ours but will also have elements of their self-titled album added in. He teased a big upcoming announcement as well.

I Am Human (Deluxe Edition)