From Autumn to Ashes 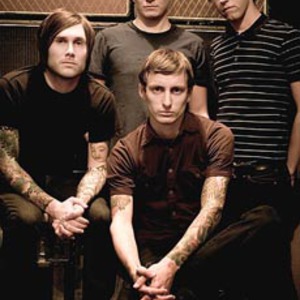 From Autumn To Ashes(or FATA) was a band from Long Island, New York, USA. The band mixed melody with hardcore styles, and their earlier albums featured a unique dual vocal style between frontman Benjamin Perri and drummer Francis Mark. This style was very innovative at the time and earned the band widespread praise. Following their 2000 EP Sin, Sorrow and Sadness, their debut full-length album Too Bad You're Beautiful was released on Ferret Records in August 2001. The unique blend of melodic hardcore and innovative vocals executed on this album quickly made the band an underground success.

Following their 2000 EP Sin, Sorrow and Sadness, their debut full-length album Too Bad You're Beautiful was released on Ferret Records in August 2001. The unique blend of melodic hardcore and innovative vocals executed on this album quickly made the band an underground success.

The bands second album The Fiction We Live, was released in September 2003 and was the first to be released on Vagrant Records. Although the album retained the intricate dual vocal style that earned the group success in the first place, the overall sound became more melodic than its predecessor, featuring a larger focus on Fran Mark's singing presence. Following the albums release, the band made videos for 'The After Dinner Payback' which featured on the 'Freddy vs Jason' soundtrack, and also 'Lilacs and Lolita' and 'Milligram Smile'. The album also marked the final appearances of guitarist Scott Gross and bassist Mike Pilato.

Featuring a new lineup of Benjamin Perri (vocals), Brian Deneeve (guitar, piano, backing vocals) and Francis Mark (drums, vocals) alongside new members Jon Cox (guitar) and Josh Newton (bass, backing vocals), Abandon Your Friends was released on Vagrant in August 2005. Due to problems with vocalist Ben and his contributions to the band, the album featured an increased focus on drummer/vocalist Fran Mark, and an overall lighter approach, marking a slight departure from the traditional FATA sound. The band made a video for 'Where Do You Draw The Line' to promote the release, but the album was not well received.

Vocalist Ben Perri left the band according to a MySpace blog posted on December 5th, 2006. However, the band continued without him, with Fran Mark on full vocal duties. Jon Cox (guitar) also left the band sometime before recording sessions in November 2006, leaving a lineup of Fran Mark (vocals and drums), Brian Deneeve (guitars) and Josh Newton (bass) to record the next album as a three piece. However, for live purposes, Fran chose to front the band. The limited edition EP These Speakers Don't Always Tell The Truth was released as a Hot Topic exclusive on March 13th, 2007, featuring 2 tracks from the brand new album, Holding A Wolf By The Ears, which itself was released on April 10th, 2007 to relatively high critical acclaim.

Ex bassist Mike Pilato returned to the live band replacing Josh Newton following the release of Holding A Wolf By The Ears, performing alongside new members Rob Lauritson and Jeff Gretz on their final tours.

FATA's final line up was;

On June 9th, 2008 the band confirmed they had broken up during promotion for their live CD 'Live at Looney Tunes'.

From Autumn To Ashes sadly split up in 2008.

East Coast Independent artikel about their breakup.
Check out the official page official site or the official MySpace for more info.

Holding A Wolf By The Ears

Too Bad You're Beautiful