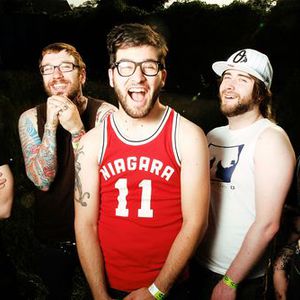 Alexisonfire (pronounced 'alexis-on-fire') was a band from St. Catharines, Ontario, Canada. Their music was characterized by turbulent and explosive dynamics with intricate guitar melodies. Consisting of five friends, they formed in late 2001 as the result of a three-band break up. In August 2011, it was announced on their website that they had broken up as members expressed interests in other projects.

The band's name is inspired by a lactating contortionist stripper named Alexis Fire. This caused problems when she discovered that they were using her website name (alexisonfire.com) as their band name, and threatened to sue. However, since she had never trademarked the title nothing became of these threats. In the end, the band decided to change their website's URL in spite to theonlybandever.com

Alexisonfire's lyrical topics range from relationship troubles to go-karting. They have two primary vocalists, screaming duties carried out by George Pettit, and singing by Dallas Green, with support from Wade MacNeil.

While their largest fanbase was in their home country of Canada, they also became more popular in other parts of the world, including Japan, Australia, Europe and the US. In the second half of 2010, they toured Australia with Break Even, Europe with Chickenhawk and The Computers and then Canada with Norma Jean and La Dispute.

The band was nominated for "ugliest rock band ever" at the CASBY awards (held by local Toronto radio station) but lost out to another Canadian born band, Sum 41. In 2010 they then won the "Best New Single" Award for their track The Northern.

Former Members:
Jesse Ingelevics - Drums (2001-2005)
Announced on their website on June 14th 2005 that he was leaving the band because he had slowly grown apart from the band, and wanted to spend more time with his family and fianc?e. His relationship with Alexisonfire slowly deteriorated, and "Keep It On Wax" documented this.

Side Projects
* City and Colour - Dallas Green's solo project.
* Black Lungs - A band formed by Wade MacNeil as lead vocalist, originally featuring George Pettit playing bass and Jordan Hastings on drums and Sean McNabb. After a few shows disolved to being Wade's solo project.
* Strange Notes - A project of George's where he interviews people from different bands.
* Hunter - A band where drummer Jordan Hastings plays with some members from Moneen.

Future
The band broke up in August 2011, despite claims of future material.