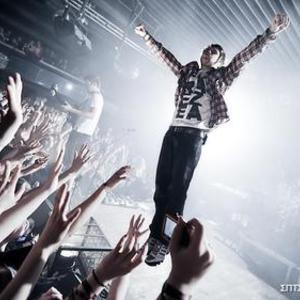 Enter Shikari is a four-piece post-hardcore band from St Albans, Hertfordshire, England formed in 2003. The band's music incorporates various rock and metal sub-genres with elements of various electronic genres such as electronica, dubstep, trance, and drum and bass, making the band particularly difficult to assign to one genre. The incorporation of electronic genres has become more prominent in their music throughout the band's history. Lyrically, their music tackles both political, social and scientific issues.

The band is named after a boat belonging to Roughton "Rou" Reynolds' uncle, and a character in a play which he wrote before forming the band, both of which are named Shikari. Despite being offered several major label record deals, their debut album Take To The Skies was released on their own label - ambush reality - in March 2007, reaching the dizzy heights of #4 in the UK's official Album Charts and going on to sell over 100,000 copies in the UK (the album was released in Europe through PIAS, in North America on Ambush Reality / Tiny Evil, and in Japan on Hostess).

In March 2008, after spending 12 months on the road across the globe, Enter Shikari set up camp in their rehearsal room (a large shed in Chris Batten's back garden which they christened "The 'Low") to begin writing tracks for their second album such as Antwerpen which was released as a free digital-download from the band's website.

In July they played to their largest live audience at the UK date of Linkin Park's 'Project Revolution' travelling festival alongside JayZ, Pendulum and N*E*R*D, as well as playing several shows with Linkin Park in mainland Europe.

Enter Shikari followed a UK / Ireland tour in October 2008 with the release of a one-off single 'We Can Breathe In Space, They Just Don't Want Us To Escape' (a finished version of a track the band demoed in 2005 but never got around to ever finishing properly until the summer 2008).

In mid-November 2008 the band started work recording their second album in Arreton Manor on the Isle of Wight with producer Andy Gray. Here they demoed, produced and mixed new tracks for the band's second album titled Common Dreads which was released June 15th 2009 on CD, Vinyl and digital download. The first track to be heard by the public was Juggernauts aired on 15th April 2009 as Zane Lowe's "Hottest Track in the World" on BBC Radio 1. Juggernauts was released on the 1st June 2009 reaching #26 in the UK Official Single Charts and was aired regularly by Radio 1.

Following the release of Common Dreads via Ambush Reality on the 15th June 2009, the album reached #16 on the UK Top 40 Official Album Chart and was highly-rated by magazines such as Kerrang!, Rocksound and Metal Hammer. No Sleep Tonight was also released as a single on August 17th 2009 with a large number of remixes following it from artists such as Rout, Mistabishi, The Qemists and LightsGoBlue.

The band recently visited the US, Germany and the Czech Republic on a mini-tour and have another UK tour scheduled for October 2009 supported by The Devil Wears Prada and also a number of dates with The Prodigy in November.

Enter Shikari's third album titled A Flash Flood Of Colour was recorded at Karma Bay Studios in Bangkok, Thailand and was produced by Dan Weller (former-Sikth guitarist). The album was released on the 16th January 2012 in the UK and worldwide. The first single from the LP was "Sssnakepit". It was released on September 20, 2011 as a digital download. According to the Sssnakepit Songfacts, "Quelle Surprise," which was made available in May 2011, was originally intended to be the first official release from the set, but the band ultimately decided to not include it on the album in the end, although did include it on the Deluxe Version. The second single, "Ghandi Mate, Ghandi" was released as a digital download on iTunes in December, followed by a video of single 'Arguing with Thermometers' posted on YouTube a few days before the release of the album.

Moratorium (Broadcasts From The Interruption)

Nothing Is True & Everything Is Possible