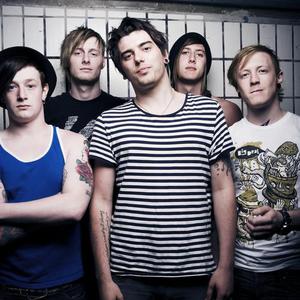 Deaf Havana are an English pop punk quartet from King's Lynn in the UK. The band was formed in 2005 at the King's Lynn campus of The University of East Anglia. The band's early releases along with constant touring developed a strong fan base in the UK music scene. The name Deaf Havana came from their former guitarist Sebastian Spitz, but the name itself has no literal meaning. Deaf Havana was formed when the original members met at the King's Lynn campus of The College of East Anglia.

Deaf Havana was formed when the original members met at the King's Lynn campus of The College of East Anglia. The bands roots can, however, be traced back much further with Ryan Mellor, James Veck-Gilodi and Lee Wilson all attending Smithdon High School and playing together in Various local scene bands. At college, these members were joined by Tom Ogden and Sebastian Spitz, this early lineup saw James singing and Ryan taking guitar/unclean vocal duties.
The band quickly got down to writing songs and an early 7-track demo, titled White Lines But No Camera, which was recorded August 2006 at the Lodge, Northampton. The band toured this lineup until the departure of Sebastian and the introduction of Chris Pennells, formerly a member of the band "Something About Dave", who took over guitar duties.

In late 2006 the band began writing songs for their debut EP, entitled "Evangeline". Two songs were roughly recorded, titled "The Smiles Were Forced" and "Where It Begins", which were uploaded on to the band's myspace page; open to opinions and criticism from their rather small fanbase. The EP was soon recorded and mixed (with "The Smiles Were Forced" being dropped from the EP's tracklisting). The EP saw the light of day at the beginning of 2007.

Around the same time, Ryan Mellor handed over guitar parts to James, and took on the role as front man.

October 2007 saw the band begin work on the songs that would become their first release.
On the 21st of June 2008 the band announced the signing of a 1 EP 2 Album deal with Wolf At Your Door Records as well as the recording date for their debut E.P.

The E.P. was eventually recorded by Jonny Renshaw from Devil Sold His Soul and was mixed by Matt O'Grady (You Me At Six, Architects). In October 2008 the band released this recording through their label, the E.P. titled It's Called the Easy Life received strong reviews from various musical publications. On the back of this success the band begin to receive some recognition. January 2009 saw the band complete a UK wide tour with We Are The Ocean - The Urgency, and around the same time, release their first music video for "Oh Howard, You Crack Me Up".

On the 25th May 2009 the band entered the studio to record their debut studio album. The full-length titled "Meet Me Halfway, At Least" was released for exclusive pre-order from Wolf At Your Door Records on 7th September and was released on iTunes and shops on 5th October 2009.

There has been two singles to date that have been taken off this album. "Friends Like These" was released, with exclusive B-side "Hey Baby, This Is Our Song", on 17 August 2009 for digital download through iTunes and other online outlets. A video was also released on the likes of Scuzz and Kerrang! Their second single, "Nicotine And Alcohol Saved My Life", will be released on 15 March 2010 for digital download. With the single, there will also be a remix of "Friends Like These" by Essex-based 6 piece, Kenai. The video was released on the music channels and online on 22 February 2010.

Before the release of the album, Deaf Havana embarked on the "Metal Hammer Introducing" Tour along with Young Guns and The Casino Brawl. This tour took them all over the UK. A week after the last date, Deaf Havana played a home town show in King's Lynn as an album release party. Support for this show came from Underline The Sky and All Forgotten.

2010 see's Deaf Havana on several tours across the UK and Europe; A headlining UK mini tour with All Forgotten and Francesqa in March, a European tour with Emery in March/April, and a support slot on Emarosa's UK tour in May. Just before the start of the mini tour with All Forgotten, it was announced via the band's myspace and facebook, that Ryan would not be embarking on these future tours with them due to personal problems. To take his place on the tours, Deaf Havana enrolled Max d'Albiac from a band called Brides.

On 10 May 2010, it was announced via the band's Facebook and Myspace, that Ryan would unfortunately be leaving the band due to the same, unresolved personal reasons that caused him to pull out of the recent tours. Deaf Havana would be continuing on as a 4 piece. As a result, they are getting rid of all screams in future releases, mainly because they feel it would be wrong to replace Ryan.

The band have already started to write the follow up to 2009's "Meet Me Halfway, At Least". A few days after announcing the departure of Ryan, Deaf Havana released a new demo track on Myspace and Facebook, entitled "My Life Is Average". This saw the band going back to how they were before the line-up change in 2006, opting for a softer sound, yet still incorporating the sound they had established over the previous album and EP.

On May 29 and May 30, 2010, Deaf Havana played on the Kerrang! Introducing Stage at Slam Dunk Fesitval at University of Hertfordshire, Hatfield and University of Leeds respectively. At these shows, the band opened with a new song, of which the title wasn't revealed. On August 7, 2010 they will play at the Hevy Music Festival held near Folkestone, Kent.

On the 19th of May the band released the video for the song 'The World or Nothing' from their new untitled album, the song is not a single and isn't released as a download, the song furthers the band's progress into a new pop punk sound.

Fools and Worthless Liars was released on the 7th November 2011, coinciding with London Barfly and Norwich Arts Centre release gigs. The album peaked at #1 on the BBC Rock Album Chart. In late November and early December the band toured Europe as direct support to Skindred before returning to the UK to support Architects on their tour through mid December. The band are to perform their own UK headline tour through April 2012.

THE PRESENT IS A FOREIGN LAND

All These Countless Nights

Meet Me Halfway, At Least