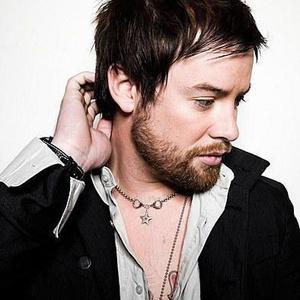 David Roland Cook (born December 20, 1982 in Houston, Texas, US) is an American rock singer-songwriter, who rose to fame after winning the seventh season of the reality television show American Idol. Prior to Idol he released an album entitled Analog Heart; his post-Idol self-titled album, produced by Rob Cavallo, was released on November 18, 2008 and has been certified platinum by the RIAA, as were two singles from the album, "Light On" and "Time of My Life." A third single, "Come Back To Me," was certified gold.

On June 28, 2011, Cook released his second major-label studio album, entitled This Loud Morning. Produced by Matt Serletic, the album consists of 14 tracks penned by Cook along with co-writers David Hodges, Ryan Tedder, Kevin Griffin and Marti Frederiksen, among others. The album title comes from a line in the song "Rapid Eye Movement" ? "Give me one more quiet night, before this loud morning gets it right, and does me in."

On May 10, 2012, Cook debuted a new, independently released single, The Last Song I'll Write for You, on American Idol. Speaking with The Hollywood Reporter, Cook denied this was written with his former record company in mind, despite the fact it was his first new song after losing his recording contract with RCA. He insisted it was a break-up song that came together very quickly. (The Last Song I'll Write For You Songfacts).

Early Music Career: David Cook formed a band with his friend Bobby Kerr while at high school. The band was initially named Red Eye, later Axium. He wrote his first song titled "Red Hot" when he was fifteen. He was encouraged by Evan Sula-Goff of 8stops7 to make an album when he went to Cook's school to judge a contest, Mr. Jaguar, where David Cook and his band performed Guns N' Roses' "Paradise City". The band had some success when one of their songs, "Hold", was selected to be played in movie theaters across the country, and they were named one of the top 15 independent bands in the country by "Got Milk?" contest as well as the best Kansas City band in 2004.

Axium however broke up in 2006 and David Cook moved to Tulsa where he joined Midwest Kings, a band he once opened for. Members of that band Andy Skib and Neal Tiemann later became part of David Cook's post-Idol band The Anthemic. He recorded and self-released a solo album Analog Heart in 2006, which sold well regionally.He worked as a bartender prior to appearing on Idol.

In 2006, after obtaining a degree in graphic arts, Cook had to decide whether he wanted to be a musician or a graphic designer. ?I gave myself every opportunity not to do music,? he says, ?but it was always there. I couldn't ignore it.? He moved to Tulsa, Oklahoma, and was in the early stages of recording his second album when his younger brother Andrew asked Cook to accompany him to Omaha and lend moral support while he tried out for American Idol. Andrew didn't make the cut, but he encouraged a very reluctant David to try out. After Cook made it through the early auditions, he reportedly told his brother he'd drop out if Andrew didn't want him to go through with it. ?He threatened to beat my ass if I didn't, so it's entirely his fault that all this happened to me,? Cook says with a smile.

One week after being declared the winner with a record-breaking 56 percent of the nearly 100 million votes cast, Cook rewrote chart history when 11 of his songs debuted on Billboard's Hot 100 chart ? the highest number of new entries in a single week by an artist since the Beatles in 1964. Topping the list was "The Time of My Life," which debuted at No. 3, making it the highest new entry on the Hot 100 of 2008.

Cook's self-titled major-label debut was released on November 18, 2008. His debut album was certified Platinum by the Recording Industry Association for America (RIAA) for sales exceeding one-million units in January 2009.

In January 2009, Cook announced he would be embarking on a national tour in February. The Declaration Tour began on February 13, 2009 in Tallahassee, Florida, and was originally set to end in Tulsa, Oklahoma on April 25, 2009. Due to strong ticket sales, the tour was extended several times, finally wrapping up on December 1, 2009 at The Fillmore in Charlotte, North Carolina, after 154 concerts in the U.S. and Canada. During 2009 Cook also took his show overseas to the Philippines, and performed for troops in Iraq with the USO.

The Time Of My Life (Single)