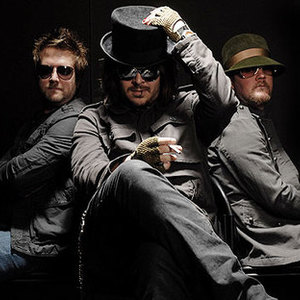 Seether is a post-grunge/alternative metal band which formed in Pretoria, South Africa in 1999. The band currently consists of Shaun Morgan (vocals, guitar), Dale Stewart (bass, vocals) and John Humphrey (drums). The band has released six albums and is currently signed to Wind-Up Records in the United States. Early days, Fragile, Disclaimer The band was originally called Saron Gas, but changed their name to Seether.

The band was originally called Saron Gas, but changed their name to Seether.

Saron Gas had their origins in Johannesburg, a city of South Africa, and the earliest days of the group saw their public appearances at parties, nightclubs, small-scale concerts and University venues, such as the University of Cape Town and the University of Stellenbosch, where they played for the lunch-time crowds in the Neelsie centre on the latter campus as late as the summer of 2001.

As Saron Gas, the band released its first album, Fragile on Musketeer Records, in 2000 in South Africa. Upon achieving success on the South African music charts, Wind-up Records took an interest in Saron Gas' melodic-yet-heavy sound and signed them to the label. The band was asked to change their name due to Saron Gas being a homophone of sarin gas, a deadly nerve agent discovered (but never used in war) by Nazi Germany during World War II.[citation needed] The band changed its name to Seether in honor of Veruca Salt's song titled, "Seether".

After Disclaimer was released, the band went on a non-stop touring route in hopes of boosting sales and name recognition. Upon completing the tour, the band had planned to go into the studio and record their second release. However, they were instead tapped to support Evanescence on a worldwide tour that postponed their recording plans by almost a year. On this tour, the band reworked the acoustic ballad "Broken" into an electric ballad and had Amy Lee of Evanescence share vocal duties with Morgan during live performances. Inspired by the positive reaction the duet got on the road and perhaps fueled by a budding romance between Lee and Morgan, the band headed into the studio and quickly recorded an alternate version of "Broken" with Amy Lee on vocals. The song, along with a new song titled "Sold Me", was featured on the soundtrack for the 2004 film The Punisher and was massively successful, bringing the band fame in the US, the UK and Australia in particular. Morgan has stated that the hit song relates an incident where the band was subjected to what the record company wanted rather than what the band wanted. Disclaimer II, an alternate version of the original album with many of the songs remixed or re-recorded as well as eight extra tracks, was released in late 2004.

Karma and Effect, One Cold Night

In 2005, the band released their follow-up album Karma and Effect. The original title for the album was Catering to Cowards, but the band's record label instructed them to change the name. [3] "Karma and Effect" debuted at number 8 of the US Billboard 200 album charts and was certified gold in the US and Canada. The album spawned three singles, "Remedy", "Truth" and "The Gift". "Remedy" reached number 1 of the US Mainstream Rock Charts, becoming the band's first number 1 single.

Seether released an acoustic CD/DVD set titled One Cold Night, recorded on 22 February 2006 at Grape Street in Philadelphia. Morgan, who had been suffering from a stomach ailment, decided to do an acoustic performance of their set-list rather than cancel the show. Shaun has stated that the label chose to make the album without obscenities, which is the reason why "Needles" and "Burrito" are not on the album.

On June 16, 2006, it was announced via Seether's official site that lead guitarist Pat Callahan had chosen to leave the band. The exact reason for Callahan's departure is unknown, but regarding his feelings over the situation, Shaun Morgan commented:

"Um? relieved a little? actually a lot. He was the guy in the band that was always our naysayer, and he was the negative energy as far as writing. I personally have no love lost, which is weird for some reason 'cause he was my friend for four years. But when he walked out, it kinda walked out with him."[2]

Morgan went into rehab for alcoholism in August 2006, forcing the band to cancel their tour with Staind and Three Days Grace.

Morgan had claimed prior to the new album's debut that it would be more diverse than previous efforts. Its release was delayed due to the sudden suicide of Morgan's brother, Eugene Welgemoed. Produced by Howard Benson, the album finally hit the shelves on October 23, 2007.

"Finding Beauty in Negative Spaces" debuted at number 9 in the Billboard 200 album charts, selling 57,000 copies in the first week. The artwork for the album was illustrated by David Ho.

The first single, "Fake It," reached the top position in the US Mainstream Rock Charts and Modern Rock Charts, remaining on top for at least 9 weeks on both charts. It was also the theme for WWE's No Way Out 2008. Since the success of "Fake It," a second single, "Rise Above This," has been released and has reached the #1 spot on the Modern Rock Tracks chart and the top 2 with its mainstream counterpart. As of February 15, 2008, Troy McLawhorn of Dark New Day joined the band as a touring guitarist, and has since been made an official member. McLawhorn previously did a stint as Evanescence's replacement guitarist during the last leg of The Open Door tour.

To support the release of the hugely successful second single, "Rise Above This," Seether launched a tour in early 2008 that lasted for much of the year and saw them share the stage with several bands for several different legs, including Three Days Grace, Finger Eleven, Breaking Benjamin, 3 Doors Down, Skillet, Red, Papa Roach, Flyleaf, Econoline Crush, and Staind.

Shaun has also announced that with 2009 marking Seether's tenth anniversary, a new release coinciding with the anniversary has been negotiated with Wind-Up Records. It has been said to include old unreleased tracks and demos, including Saron Gas demos, but exact details are yet to be confirmed.

On August 5, 2008, Seether released an iTunes Originals album that follows the pattern of previous releases in the series, featuring interviews between chosen album tracks and reworked versions of previously released songs.

The video for "Breakdown" was released on November 12 after a delay from its original October 23 scheduled release date.

In early 2009, a new song titled "No Shelter" was featured on the NCIS Official TV Soundtrack, released on February 10. Also, a cover of Wham!'s "Careless Whisper" was made available for purchase as a digital or mobile download.

Holding Onto Strings Better Left to Fray, Seether's fifth studio album was released on May 17, 2011. According to the Country Song Songfacts the title is a paraphrase that Shaun Morgan read in a book, which he thought was an amazing visual.

They have also released a remix EP for this album, Remix EP.

Let You Down (CDS)

Walmart Soundcheck: Live In The Studio