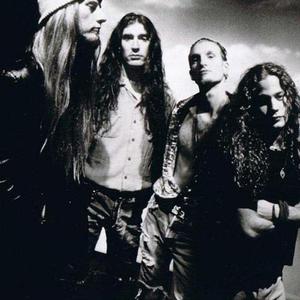 Alice in Chains are one of the most influential American rock bands of the early '90s. Drawing equally from the heavy riffing of metal and the gloomy strains of grunge, the band developed a bleak, nihilistic sound that balanced grinding metallic riffs with subtly textured acoustic numbers. They were hard enough for metal fans, yet their dark subject matter and punky attack placed them among the front ranks of the Seattle-based grunge bands. While this dichotomy helped the group soar to multi-platinum status with their second album, 1992's Dirt, it also divided them.

Guitarist / vocalist Jerry Cantrell always leaned toward the mainstream, while vocalist Layne Staley was fascinated with the seamy underground. Such tension drove the band toward stardom in their early years, but following Dirt, Alice in Chains suffered from near-crippling internal tensions that kept the band off the road for the remainder of the '90s.

Formed in 1987 by Staley, guitarist Jerry Cantrell, bassist Mike Starr, and drummer Sean Kinney, the band was first named ?Alice N' Chains?, and later changed to "Alice in Chains". Combining the unique voice and intense delivery of Staley with the evocative songwriting and vocal harmonies of Cantrell, Alice in Chains created an immediately identifiable sound that also proved to be quite versatile as their repertoire grew to include both driving, angry rock songs and mellow acoustic compositions. The unique vocal harmonies of Staley and Cantrell included overlapping passages, and dual lead vocals. Alyssa Burrows said the band's distinctive sound "came from Staley's vocal style and his lyrics dealing with personal struggles and addiction". Staley's songs were often considered "dark", with themes such as drug abuse, depression, and suicide, while Cantrell's lyrics dealt more with personal relationships.

Although Alice in Chains has been labeled grunge, alternative rock, and hard rock, Jerry Cantrell identifies the band as primarily heavy metal. He told Guitar World in 1996; "We're a lot of different things... I don't quite know what the mixture is, but there's definitely metal, blues, rock and roll, maybe a touch of punk. The metal part will never leave, and I never want it to". Alice in Chains has cited musical influences such as Black Sabbath, Led Zeppelin, and Metallica.

Jerry Cantrell's guitar style combines what Stephen Erlewine of All Music Guide called "pummeling riffs and expansive guitar textures" to create "slow, brooding minor-key grinds". While down-tuned distorted guitars mixed with Staley's distinctive "snarl-to-a-scream" vocals appealed to heavy metal fans, the band also had "a sense of melody that was undeniable," which introduced Alice in Chains to a much wider pop audience outside of the heavy metal underground.

The band found commercial and artistic success in the early 90's, primarily through the release of Dirt which also highlighted Staley's increasingly apparent addiction to heroin. The band appeared on the successful lollapalooza tour in 1993 and released the Jar of Flies EP in 1994, but often found its attempts to follow up success in the studio or on the road to be hampered by Staley's erratic, drug-fuelled behaviour. Former Ozzy Osbourne bassist Mike Inez came to replace Starr and the band would eventually record a third studio LP as well as a performance of MTV Unplugged. Ultimately, however, Alice in Chains would fail to maintain a consistent career in the post-grunge music world and limped into hiatus when Cantrell turned his attention to solo projects (which often included contributions from Kinney and Inez). Staley finally succumbed to his affliction when he overdosed in April 2002.

Although Alice in Chains never officially disbanded, Staley became a recluse, rarely leaving his Seattle condominium following the death of his fianc?e in 1996, due to bacterial endocarditis. "Drugs worked for me for years", Staley told Rolling Stone in 1996, "and now they're turning against me, now I'm walking through hell". In 1998, Staley reunited with Alice in Chains to record two new songs, "Get Born Again" and "Died". Originally written for Cantrell's solo album, the songs were released in the fall of 1999 on box set, Music Bank. The set contains 48 songs, including rarities, demos, and previous album tracks. The band also released a 15-track compilation titled Nothing Safe: Best of the Box, serving as a sampler for Music Bank, as well as the band's first greatest hits compilation. The band's last official releases include a live album, simply titled Live, released on December 5, 2000, and a second greatest hits compilation, titled Greatest Hits in 2001.

After a decade battling drug addiction, Layne Staley was found dead in his condominium on April 19, 2002. An autopsy revealed Staley died from a mixture of heroin and cocaine 14 days previously. In his last interview, which was given months before his death, Staley admitted, "I know I'm near death, I did crack and heroin for years. I never wanted to end my life this way". Cantrell, shaken by the death of his friend and band mate, dedicated his 2002 solo album, Degradation Trip, to Staley.

Jerry Cantrell, Mike Inez and Sean Kinney reformed and played shows in late 2005 and early 2006 with a variety of guest vocalists, including Billy Corgan, Pat Lachman, Wes Scantlin, Maynard James Keenan, Ann Wilson and Phil Anselmo. For their European and U.S. tours of mid-late 2006, William Duvall (Comes With the Fall) performed lead vocals.
Vocalist for Comes With the Fall, William DuVall, joined Alice in Chains as lead singer during the band's reunion concerts. Velvet Revolver and ex-Guns N' Roses bassist Duff McKagan also joined the band for the reunion tour, playing rhythm guitar on selected songs. Before the tour, Kinney mentioned in an interview that he would be interested in writing new material, but not as Alice in Chains. However, AliceinChains.com reported that the band has begun writing new material, with DuVall on lead vocals. In September 2009 the band released their first studio album since 1995. The album is called 'Black Gives Way to Blue' and is a surprisingly good album and is received worldwide with good critisism. During the last months of 2009 they tour Europe and almost everywhere the shows are sold out.

Alice in Chains has sold more than twenty million albums in the United States (and an estimated 40 million worldwide), released two number-one albums and 19 top 40 singles, and has received six Grammy nominations. The band was ranked number 34 on VH1's 100 Greatest Artists of Hard Rock. Alice in Chains has had a large impact on many bands, such as Godsmack, who, according to Jon Wiederhorn of MTV, "have sonically followed Alice in Chains' lead while adding their own distinctive edge". Godsmack singer Sully Erna has also cited Layne Staley as his primary influence. Staind has covered Alice in Chains' song "Nutshell" live, which appears on the compilation The Singles: 1996-2006, and also wrote a song entitled "Layne", in Staley's dedication, on the album 14 Shades of Grey. Other bands that have been inspired by Alice in Chains include Taproot, Puddle of Mudd, Smile Empty Soul, Creed, Nickelback, Cold and Tantric. Metallica, who originally influenced Alice in Chains, in turn said they always wanted to tour with the band, citing Alice in Chains as a major influence on the vocal melodies for Metallica's eighth studio album St. Anger.