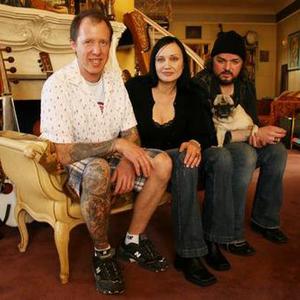 There are several artists called Eleven are an American rock band. Eleven is a production team made up of Alain Johannes and Natasha Shneider (died July 2, 2008). Their abilities extend beyond production, engineering and mixing to include songwriting, arrangement and orchestration. Their band, Eleven, which includes drummer Jack Irons (Red Hot Chili Peppers, Pearl Jam) have recorded five critically-acclaimed albums which have won the respect and admiration of fellow musicians.

Eleven is a production team made up of Alain Johannes and Natasha Shneider (died July 2, 2008). Their abilities extend beyond production, engineering and mixing to include songwriting, arrangement and orchestration.

Their band, Eleven, which includes drummer Jack Irons (Red Hot Chili Peppers, Pearl Jam) have recorded five critically-acclaimed albums which have won the respect and admiration of fellow musicians. They have toured extensively with Pearl Jam, Soundgarden and Queens of the Stone Age, joining the latter as touring and recording members for the past 5 years.

Gifted musicians and songwriters, Alain and Natasha have performed, engineered and produced recordings for many artists. Some career highlights to date include:

? Chris Cornell - Alain and Natasha produced, engineered and mixed
Cornell's debut album, "Euphoria Morning" They recorded the album
at their studio, 11AD, performing and arranging all of the tracks
as well as co-writing many of them.

? Queens of the Stone Age - Alain engineered several projects for this
band as well as co-wrote several songs on "Songs For The Deaf" and
Lullabies To Paralyze." Alain and Natasha have also performed on
these albums.

? No Doubt - Alain began his relationship with No Doubt by engineering
"Return To Saturn." Alain and Natasha also co-produced "Love To Love You Baby"
which appeared on the "Zoolander" soundtrack, as well as several tracks on
"B-Sides" album.

? Live - Their album "V" was recorded at 11AD and co-produced/engineered by Alain.

? Brian May (Queen) and Jimmy Gnecco - Alain and Natasha wrote "Someone
To Die For" which is on the Spider-Man 2 soundtrack.

? Desert Sessions 7&8 and 9&10 - Alain and Natasha have performed and written on
this critically acclaimed series of callaborations which include P.J. Harvey,
Josh Homme and Dean Ween, as well as many others.

Eleven (sr) The band is driven by the idea to make music with straight and honest approach to melodies and lyrics. Songs are written in impressionistic manner and reflect different ambients and feelings, while maintaining distance from primitive expressions of love and political messages. The band consists of Milan Arnautovi? Firca (ex Goblini, drums), Predrag Dani?i? (vocal, guitar), Milan Stankovi? (bass guitar) and Milo? Cvetuljac (guitar). For more information go to Elevenmusic

Eleven (se) is an electronic pop band from Ume? in Sweden. The name is swedish and means "the Student" in english. They have released one album by the name "Familjen P&aring; St&aring;lv&auml;gen 5"

In "Hip-hop Lives," KRS-One says, "Hip means to know / It's a form of intelligence / To be hip is to be up-date and relevant / Hop is a form of movement / You can't just observe a hop / You got to hop up and do it." Boise-based hip-hop artist David Maxwell, who uses the stage name Eleven, holds KRS-One's testament to heart. Eleven raps about the life he has led and the things he has learned along the way. He also rocks the crowd. Eleven has honed some interactive stage techniques at his day job as a teacher. He spends his days guiding young minds through the rigors and joys of writing while teaching ninth- and 11th-grade English at Eagle High School. When the bell rings, however, Eleven immerses himself in his own writing?words that he eventually takes to the stage. Born in Florida and raised San Diego, Eleven was raised primarily by his mother after she split from his father early on. Eleven made the point that though he grew up with his mom, his dad wasn't completely out of the picture. "My dad and I are more than just father and son, we are also great friends. He was never a deadbeat dad." Having an always-at-work single mother meant Eleven's home life was a bit lonely. Instead of staying home and watching TV, Maxwell took to the streets to hang out with his friends. For a soon to be hip-hop artist in So-Cal, he was growing up at just the right time. "I was a break dancer as a kid. I listened to all the big groups at the time: Run DMC, Eric B and Rakim ... I loved the whole Krush Groove era," Eleven said. "As I got into high school, I really got into EPMD and then big time into the West Coast hip-hop when Dre and Snoop got big." Eleven found inspiration in the artists he was listening to in high school and formed his own hip-hop group. He christened himself Voice and along with two other MCs, started performing wherever he could?including the parking lots of other high schools and street corners. Unfortunately, just as they started to generate a buzz, the band members graduated and each went their separate ways. So Maxwell put down his microphone and headed off to Fresno Pacific University to focus on an education and sports. In college, Eleven earned a degree in communication and after graduation started working in broadcasting?a job he quickly realized he wasn't cut out for. Shortly after quitting his broadcasting job, he fell into what he felt was his true calling and started substitute teaching in San Diego, very quickly being hired as a full-time English teacher. Spending his days inspiring young minds to write also inspired Eleven to pick up the pen again. "I thought back to the teachers that inspired me. My literature teachers were my favorite. They had me reading books and writing things that I never would have done on my own," said Eleven. "I was writing these raps to interest the kids, and I realized how much I still liked it." Very quickly his spiral notebooks started filling up with his deeply introspective verse. "Anybody can write about cars ... money ... it's a few of us that look beyond those things and write about our real purpose in life," he said. Maxwell started making mix-tapes of his verses to pre-recorded beats. He began getting on stage again and was soon working on projects with all original beats and production. This time around, he dubbed himself Eleven. "I have a lot of lines that refer to the number. It was my football number and basketball number ... so I associate it with a lot of things that I do. I consider myself to be one of one and I try to hold myself above. One above the average," said Eleven. "I preach that in my music. Be yourself. If someone is going to influence you, let it be positive."

Awake In A Dream