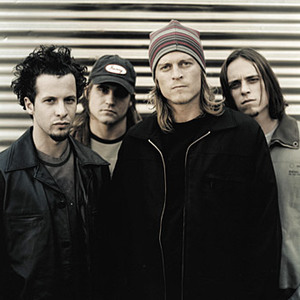 Puddle of Mudd is an American post-grunge band. They achieved success on rock radio and some success in the mainstream, and their major-label debut Come Clean has sold over 5 million copies. To date the band has sold over 7 million albums, and have had a string of #1 mainstream rock singles in the United States. The original incarnation of this band was formed in 1992 in Kansas City, Missouri. In their hometown, they released their debut album "Stuck" in 1993, followed by "Abrasive" in 1996, to little commercial success.

Following the break-up of this intial setup, a new version of the band was formed in Los Angeles by vocalist Wes Scantlin.

Wes Scantlin was born in St. Joseph, Missouri. Raised in Kansas City, he attended Park Hill High School. After high school, he started the creation of Puddle of Mudd, now now famous for songs such as "Control", "She Hates Me", and "Blurry". Scantlin got his start in the music business after a copy of his demo was given to a friend producer by the name of Fred Durst. Durst enjoyed the demo, but Wes neglected to take any major steps forward with the band. Later, upon hearing that Scantlin's first attempt at a band had failed, Durst decided to bring Scatlin to California in an attempt to put a new band together.

In California Scantlin met Doug Ardito, an intern at Interscope Records. When Scantlin found out about Ardito's bass playing, they decided to work together. Still in pursuit of a guitarist, Fred Durst contacted a guitarist from his hometown of Jacksonville, Florida, Paul Phillips. Phillips auditioned for the spot in Puddle of Mudd, and upon acceptance, left college to join the band full time. A drummer was also recruited from Jacksonville, however, via creative differences, left the band before it achieved any mainstream media attention.

The name of the band was inspired by the Missouri River flood, where the band in its early days performed and practiced. The large amount of pressure from the equipment left the floor a big "puddle of mud."

Their second album, "Come Clean" spawned 4 hits in 2003 and has sold 5 million albums to date. Their follow up, "Life On Display" spawned 1 hit single and sold 600,000 albums. In 2007, the band released "Famous", which takes a general rock as well as "nu-grunge" approach.

The band is currently working on a live album that is slated for release in 2008.
They have released their fourth album "Songs in the Key of Love and Hate"

Songs In The Key Of Love & Hate

We Don't Have To Look Back Now