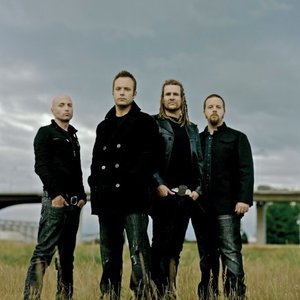 There are at least two artists/bands with the name Default. 1. A Canadian Rock Band. 2. A Producer in the UK. 1. Default is a Canadian alternative rock band from Vancouver, British Columbia. They have released four albums to date. Default were initially discovered by Chad Kroeger of Nickelback. Impressed by the band, Kroeger aided Default wherever possible by taking them on tours, co-writing songs, and producing material. Default have since progressively distanced themselves from Kroeger's influence over the years.

1. Default is a Canadian alternative rock band from Vancouver, British Columbia. They have released four albums to date.

Default were initially discovered by Chad Kroeger of Nickelback. Impressed by the band, Kroeger aided Default wherever possible by taking them on tours, co-writing songs, and producing material. Default have since progressively distanced themselves from Kroeger's influence over the years.

Default's hit single "Deny" was featured in the 2003 iteration of EA Sports' NHL video game series which help them gain even further exposure. Having already amassed an adequate fan base and frequent radio airplay in their native Canada, they managed to gain popularity in the United States for their hit singles "Wasting My Time" and "Deny" from their first album The Fallout. Default's first and second albums were produced with the help of Chad Kroeger, who would later reduce his involvement by only co-writing one song for their third album "One Thing Remains". Despite the significant success of the singles from The Fallout, Their follow-up albums Elocation and One Thing Remains failed to gain the same amount of popularity and radio airplay in the United States as their debut. Elocation was mostly successful for their hit single "(Taking My) Life Away" which was played extensively on the radio and television in Canada. Their second single from "Elocation" was "Throw It All Away", which was then followed by "All She Wrote". The single "Count on Me" from their third album One Thing Remains was a hit on Canadian radio before the album was even released. The Band also had their song "The Memory Will Never Die" featured on WWE's Wrestlemania.

Default's fourth album, which was originally planned to be released in 2007, had suffered significant delays and setbacks due to issues with their record label TVT, which eventually went bankrupt and was sold to an independent label known as The Orchard. Back on a new label, Default's fourth album "Comes and Goes" to be released in September 2009 via EMI Canada Records, with the first single being "All Over Me".

2. DEFAULT is a Producer from the UK, currently releasing material on Creepy Cuts.

default has always had a passion for music that kicks you straight in the head! heavyweight bass that rips into your guts,and beats that could kick the red off the devil himself!!.

in his early days it was all about heavy metal,the likes of slayer,carcass etc etc,this paved the way for the love of breakcore/gabba/noize that he aquired during later years of dj'ing. Default started off mixing varied styles of dnb from jump up to dark techstep with a little bit of liquid as well, the next natural step was jungle venturing back to the good years of 93-96, Defaults love of the Amen break really started to show through in his sets.

Default also has a soft side for the nicer things in life. Old school/breakbeat/dubstep he even found a small liking to techno too. Default only started to mix in the year 2000, playing at outdoor/indoor raves/parties and house parties up and down the UK, he then moved onto pub/club nights playing at places such as: The custard factory (birmingham); Timbuk2 and The arc bar (bristol); Studio, The 12 bar, Rehab, The Regent, Fusion, Buckhurst Carnival and The Vic (swindon); The Angel (Wootton Bassett); and Crackers (gloucester) to name but a few... After discovering a real love for electronic music Default moved into production in 2005, the same year he found dubstep 'wob wob wob...' Around 2007 it was all about ragga jungle and it still is!!