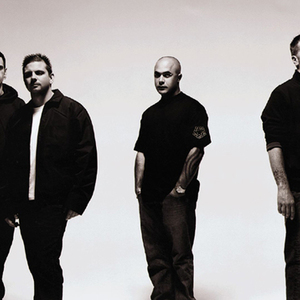 Staind is an alternative metal band formed on November 24, 1995 in Springfield, Massachusetts, United States. After meeting through friends and covering pop hits of the day in smalltime clubs for a year and a half, Staind self-released their debut album, Tormented, in November 1996, citing influences in brutal latin thrash metal. Until recently, the album was difficult to obtain, as only four thousand copies were originally sold. Since then, the band's official website has released the album to meet the demand from fans.

During this time, Staind played a show with Limp Bizkit. When Fred Durst saw the controversial cover of the group's self produced album; tormented, he tried to have the band kicked off the bill, but when he saw the band's live show, he changed his tone and befriended them. Durst later sang harmonies on the live version of Outside, which was recorded at a Family Values Tour concert in Biloxi, MS, in late October 1999. Durst went on to be one of the executive producers for Dysfunction and Break the Cycle. He also directed a few videos for the band later on, including It's Been Awhile.

The band's big break came in October 1997 after Limp Bizkit frontman Fred Durst witnessed the band open up for them at a Hartford, Connecticut show, eventually signed them to his Flip record label, and co-produced their 1999 breakthrough Dysfunction with Terry Date. Although it is supposed that the band owe a lot of success to Durst, Aaron Lewis has expressed in interviews that Durst never had much of a relationship with either the singer or the band, claiming the band 'only worked on four songs with Durst and recorded the rest of the album themselves.' [4] Staind has not been associated with Durst since he directed several videos from their 2001 follow-up. Dysfunction has sold over two million copies in the U.S. alone. The album was given mediocre reviews by critics for being "indicative of the times", but a large number of the band's fans nonetheless regard it as the group's best work. The nine-track LP (with one hidden track, "Excess Baggage") produced three singles, all of which enjoyed radio play. The most well known, "Mudshovel", (which also appeared on Tormented, spelled as "Mudshuvel"), has since become a staple of the band's live shows.

Staind toured with Limp Bizkit for the Family Values Tour during the fall of 1999, where Aaron Lewis performed their first mainstream hit "Outside" (a song he was working on at the time but had not yet finished?he finished it on the fly while performing) with Fred Durst to hundreds of waving cigarette lighters, and which set them up for their smash hit 2001 album Break the Cycle, which brought them international success (it went number 1 in both the U.S. and the UK), sold more than 7 million copies, and had first week sales of over 767,000 in the U.S. alone. The album sees the band move away from the nu metal sounds of their previous album and resort to an alternative metal sound [5] which has spawned five hit singles to date, "It's Been Awhile", (which hit the Billboard Top 10) "Fade", (which has been featured on a number of movie soundtracks and television shows), "Outside", "For You", and the acoustic ballad "Epiphany", and included a track called "Waste", devoted to two teenage fans who committed suicide shortly before the album was released. The album also received mixed critical praise; Rolling Stone magazine called them "the grim genre's most song-oriented, downright sensitive band in years" [3] while New Musical Express referred to the album as "14 tracks of parent-friendly grunge-flavoured soft rock that make Creed sound like GG Allin." [4]. 'It's Been Awhile' spent a total of 16 and 14 weeks on top of the modern and mainstream rock charts, respectively, making it one of the highest joint number 1s (30 weeks) of all time.

In early 2003, Staind embarked on a worldwide tour to promote the release of the follow-up to Break The Cycle, 14 Shades Of Grey, which sold two million albums and debuted at number 1 on the Billboard 200. The fourteen-track collection was the band's most mainstream yet[6], and showed Aaron Lewis writing songs about his daughter, as well as moving on with his life and forgetting his past, hence the title representing uncertainty for the future and forgiveness. The album provided two mainstream hits: the lead single "Price to Play", and "So Far Away" (which spent 14 weeks on top of the rock chart); in addition, two other singles failed to crack the Hot 100?"How About You" and "Zoey Jane"? but "How About You" was a fairly popular song on modern rock radio. Their song "Price to Play" was the official theme song of WWE's Vengeance pay-per-view event in July 2003. As well, their song "So Far Away" was featured on an episode of WWE RAW as part of a video tribute to hardcore wrestling legend Mick Foley. The band's appearance at Reading Festival during the 2003 tour had another impromptu acoustic set, this time due to equipment failure. The singles "So Far Away" and "Price to Play" came with two unreleased tracks, "Novocaine" and "Let It Out", which were released for the special edition of the group's Chapter V, which came out in late 2005. In 2003, Staind unsuccessfully sued their logo designer Jon Stainbrook in New York Federal Court (blabbermouth.net) for attempting to re-use the logo he had sold to the band. They re-opened the case in mid-2005.

After extensive promotions, including an appearance on Fuse TV's 7th Avenue Drop, Staind's newest album, titled Chapter V was released on August 9, 2005, and became their third consecutive number one. The album opened to sales of 185,000 and has since been certified platinum in the U.S. The first single "Right Here" has been the biggest success from the album thus far, garnering much mainstream radio play and peaking at number 1 on the mainstream rock chart. "Falling" (the video of which does not feature the band members at all) was released as the second single, followed by "Everything Changes" and "King of All Excuses." Staind have been on the road since the album came out doing live shows and promoting it for a full year, including participating in the Fall Brawl tour with P.O.D., Taproot and Flyleaf, a solo tour across Europe and a mini-promotional tour in Australia for the first time. Recent live shows have included a cover of Pantera's This Love, a tribute to Dimebag Darrell. Staind appeared on The Howard Stern Show on August 10, 2005, to promote their new album Chapter V. They performed acoustic renditions of the single Right Here and Beetlejuice's song "This is Beetle." Their rendition of "Beetle" is immensely popular with fans and listeners alike and became a staple of the show. Staind also performed a version of "Comfortably Numb" by Pink Floyd. Kevin Lofton, who does all the animation for the Howard Stern website, created a black-and-white animated video for the song. During a January 2006 Episode of WWE RAW, a tribute video to then WWE Champion Edge featured the band's song "Right Here". In early November 2005, Staind released the limited edition 2-CD/DVD set of Chapter V. The set included several rarities and fan favorites? music videos; a complete, 36-page booklet with exclusive artwork; an audio disc with an acoustic rendition of "This is Beetle"; the original, melodic rendition of "Reply"; the previously released B-side singles "Novocaine" and "Let It Out"; and live versions of "It's Been Awhile" and "Falling", among many others.

Staind announced that they would be performing an acoustic show in the Hiro Ballroom, New York City on September 6 and the songs played would be recorded for their upcoming "Greatest Hits" album, scheduled for a November 14 release. They played sixteen songs including three covers: Tool's Sober, Pink Floyd's Comfortably Numb and Alice in Chains's Nutshell.

The Illusion Of Progress

On August 19, 2008, Staind released their 5th studio album (6th overall), The Illusion of Progress. A limited edition of the album was also made available to fans, which included 3 bonus tracks and a year membership in the Staind Fan Club, along with other items (the first 200 fans who pre-ordered the album through Atlantic Records received a signed copy of the album by the band). Prior to the album's release, the track "This Is It" was available for download on the iTunes store, as well as for Rock Band. The album debuted at #3 on US Billboard 200, #1 on the Top Modern Rock/Alternative Albums Chart, #1 on the Top Digital Albums Chart, and also #1 on the Top Internet Albums Chart, with first week sales of 91,800 units. The first single on the album, "Believe", topped Billboard's Top 10 Modern Rock Tracks on September 05, 2008.

Not Again, the first single from Staind's self-titled seventh album was released to active radio stations on July 19, 2011 and made available for purchase on July 26, 2011. (Not Again Songfacts).

It's Been Awhile: Live From Foxwoods 2019

The Best Of (White Album)

The Illusion Of Progress