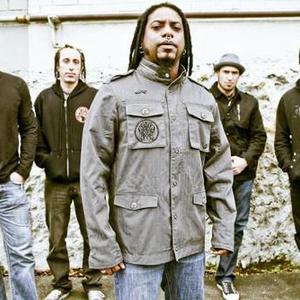 Sevendust is an American nu metal/hard rock band from Atlanta, Georgia. The band was formed in 1994 by bassist Vince Hornsby, drummer Morgan Rose and guitarist John Connolly. After their first demo, lead vocalist Lajon Witherspoon and guitarist Clint Lowery joined the group. Following a few name changes, the members settled on the name Sevendust and released their self-titled debut, Sevendust, on April 15, 1997. The self-titled debut sold 311 copies its first week. However, through touring, and Tvt support, the album gained charting success through Billboard and earned gold certification.

The self-titled debut sold 311 copies its first week. However, through touring, and Tvt support, the album gained charting success through Billboard and earned gold certification.

Bassist Vince Hornsby joined drummer Morgan Rose in 1994, in a band called Snake Nation. John Connolly, a drummer, left his current band and joined Snake Nation as a guitarist. They recorded their first demo. Not happy with vocals, however, Snake Nation spent a year searching for a new singer before finding Lajon Witherspoon. Six months passed, Clint Lowery joined the band and they renamed themselves Rumblefish.

Rumblefish was short-lived, however, because they found another band with the same name. They renamed themselves Crawlspace, and released My Ruin on the Mortal Kombat soundtrack album entitled More Kombat through TVT Records in 1996. Shortly after, another band named Crawlspace sent notice that they wanted $50,000 for the rights to their name. Rather than purchase the rights, the band members chose to rename themselves Sevendust.

Sevendust released their self-titled debut on April 15, 1997, known for its heavy riffs, angry vocals and thrash-like drumming, as the songs Black and Bitch. Black was the opening song for nearly every Sevendust concert until 2004. The debut album also contains the song My Ruin, from the Mortal Kombat soundtrack. Sevendust appeared on the Billboard 200, remained there for sixteen weeks and peaked at 165 on April 4, 1998. The album went gold on May 19, 1999.

In 1998, Sevendust performed at Dynamo Open Air (May 29?31) and Ozzfest 1998 (July through August). In the same year they released a compilation called Live and Loud which featured live footage of the bands September 16, 1998 performance at Chicago's Metro.

On August 24, 1999, they released their second album, Home. The album peaked at 19 on the Billboard 200 and featured Skin from Skunk Anansie and Chino Moreno from Deftones as guest vocalists. The two singles from the album, "Denial" and "Waffle", gave the band moderate chart success, and the latter of which was played on the Late Night with Conan O'Brien show. They appeared in Woodstock 1999 and have toured with many bands such as Korn, Staind, Nonpoint, Reveille, Godsmack, Mudvayne, Mushroomhead, Powerman 5000, Creed, Kid Rock, Machine Head, Limp Bizkit, Disturbed, and Metallica. In 1999, they gained European exposure by opening for Skunk Anansie at various shows in Germany. They also opened with Kid Rock and Ted Nugent for Metallica on New Year's Eve in 1999 at the Pontiac Silverdome near Detroit, Michigan. They also joined Slipknot, Coal Chamber and other bands on the Tattoo the Earth Tour in June 2000.

In November 2001, the band released their third album, Animosity. This album went gold and gained the band commercial success thanks to the success of singles "Praise" and "Angel's Son", which peaked at 15 and 11, respectively, on the Mainstream Rock Tracks. "Angel's Son" was a tribute to Lynn Strait, the lead singer of the band Snot, whom the members of Sevendust were friends with. Strait had died in a car accident in 1998. In addition to being included on Animosity, the song was included on the compilation album Strait Up. The band made an appearance on Late Night with David Letterman playing an acoustic version of "Angel's Son" featuring Paul Shaffer on keyboards.

In the same year Sevendust was seen in the Chris Rock movie Down to Earth as a partial clip of "Waffle" is played.

Another friend of the band, Dave Williams the lead singer of Drowning Pool, died in 2002. Tragedy would strike again when Lajon Witherspoon's younger brother was shot and killed later that year. Due to his death, Sevendust went on hiatus in 2002.


In 2003, Sevendust returned with their fourth album, Seasons. The album debuted at #14 in the US, selling around 68,000 copies in its first week. This was one of the band's best received albums and to date features their highest charting single (tied with "Driven"), "Enemy," which peaked at #10 on the Mainstream Rock Chart. "Enemy" was made the official theme song for WWE Unforgiven 2003. Other singles released from the album, "Broken Down" and "Face To Face," met with more moderate success charting at 20 and 22, respectively.

In 2004, for the first time in the band's career, they released a live album on a CD/DVD double disk package titled Southside Double-Wide Acoustic Live. Both the CD and the DVD include a cover of "Hurt" by Nine Inch Nails which is dedicated to Johnny Cash.

On December 11, 2004, after playing a show in Columbus, Ohio, it was announced that Clint Lowery had left the band mid-tour, because he wanted to play with his brother Corey Lowery in his new band Dark New Day, who had reportedly just signed with Warner Bros. Records. A replacement was found for the rest of the dates and was eventually replaced by Sonny Mayo from Snot and Amen. At roughly the same time, Sevendust and TVT Records parted ways.

On March 26, 2008, Sevendust announced that Clint Lowery, former guitarist and vocalist for the band, had quit his duties as guitarist for Dark New Day and would be returning to the Sevendust lineup in place of Sonny Mayo. On Lowery's return, Morgan Rose stated "This was extremely tough considering Sonny is our brother and has been amazing to work with. [Sonny] didn't do anything wrong at all; we just owe it to ourselves and all the folks that grew up with us to put our original band back together."

All I See Is War

Black Out The Sun