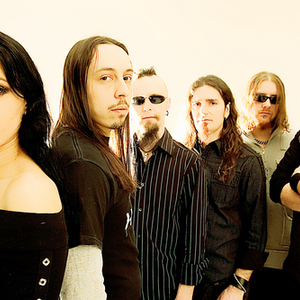 Lacuna Coil, formerly known as Sleep of Right and Ethereal, is a metal band formed in Milan, Italy in 1994. The group consists of Cristina Scabbia (vocals), Andrea Ferro (vocals and keyboards), Cristiano Migliore (guitars), Marco Biazzi (guitars), Marco Coti Zelati (bass and keyboards), and Cristiano Mozzati (drums and percussion). In 1994 Andrea Ferro and Marco Coti Zelati formed Sleep of Right, but soon changed their name to Ethereal, and signed to Century Media at the end of 1997.

In 1994 Andrea Ferro and Marco Coti Zelati formed Sleep of Right, but soon changed their name to Ethereal, and signed to Century Media at the end of 1997. Finding that the name Ethereal was already taken by a Greek band, they changed their name to Lacuna Coil, which is half Italian, half English and translates to "empty spiral".

The members of the band have been known, musically, for composing midtempo songs consisting of guitar lines overlaid with prominent keyboard work, and contrasting dual female/male vocal harmonies to help create a melodic detached sound.

Much of the band's recent material, however, sees a more down-tuned style, featuring a more distinct bass line and a higher mixing of the guitars within the songs. According to the band, they are and have been influenced by Paradise Lost, Tiamat, Anathema, Septic Flesh, Black Sabbath, Type O Negative, Imago Mortis, Depeche Mode, In Flames, and Amorphis amongst others. The band's 2006 release, "Karmacode", peaked at number 28 on the Billboard 200. They have played among the world's biggest heavy metal festivals on the main stage including Ozzfest, Bloodstock Open Air, Wacken Open Air, and played with Megadeth on their Gigantour tour in November 2007.

In 2008, it was announced that Lacuna Coil's fifth studio album would be produced by Don Gilmore, and would have some Arabic influences. Cristina Scabbia announced to the magazine Rock Sound, "It's different, but it's our style. We haven't done anything absolutely different from our style, because that wouldn't be natural, that would be weird - it wouldn't be us. The songs are definitely more powerful, more complete, more intense, more straight-to-the-point". Andrea Ferro said, "We've put more attention on the real meaning of the songs, so the vocals are a bit more prominent. We've worked a lot with Don Gilmore on the pronunciation of the words in English, so people really understand the meanings of the words. There are strong choruses, where people can relate and really understand what we mean".

In February and March 2009, Lacuna Coil played at the Australian music festival Soundwave alongside metal acts including DevilDriver, In Flames, Lamb of God and Nine Inch Nails. The festival spanned five capital cities, at which they performed their single "Spellbound", from Shallow Life for the first time. Later in July 2009, Lacuna Coil embarked on the American Spellbound Tour, alongside Kill Hannah, Seventh Void and Dommin. This was Lacuna Coil's first U.S. headlining run in over two years, and the first tour the band has been on since the Music as a Weapon Tour IV alongside Disturbed, Killswitch Engage and Chimaira in early 2009.

Live From The Apocalypse

The Presence Of The Past (Xx Years Of Lacuna Coil): Visual Karma - Live ... CD7

The Presence Of The Past (Xx Years Of Lacuna Coil): Unlashed Memories CD3

The Presence Of The Past (Xx Years Of Lacuna Coil): The Eps - Lacuna Coi... CD1

The Presence Of The Past (Xx Years Of Lacuna Coil): Shallow Life CD8