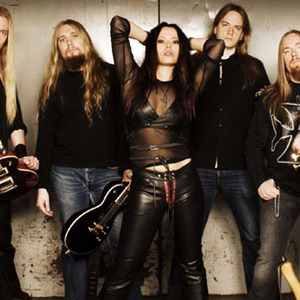 Lullacry is a melodic metal band with goth influences that hails from Helsinki, Finland. The band recorded their first demo (named Weeper's Aeon) in 1998 and in a short time they had enough of a following to safely attempt a full-length album - Sweet Desire - recorded in 1999, which later got the attention of Spinefarm Records and led to a professional contract. Their career truly began progressing after the release of the album Be My God - from 2001 - which was issued as they went on a joint tour with the power metal band Edguy.

However, vocalist Tanya quit the band in 2002, leaving Lullacry without its main element. Many female singers applied for the post, but the then unknown Tanja ultimately stepped in and brought her lightly bitter contralto vocals along with her. Their following release was entitled Crucify My Heart. The single Don't Touch the Flame taken from this album included a cover of the Nine Inch Nails track Head Like a Hole.

Prior to the record of a new full album the EP Fire Within was released including alternative versions of two of the bands classics tracks, a W.A.S.P. cover, and two new tracks.

In June 2005 the band announced the completion of their fourth album entitled Vol. 4 which was released in September of that year and was proceeded by the single Stranger in You released in July and including a Kiss cover.