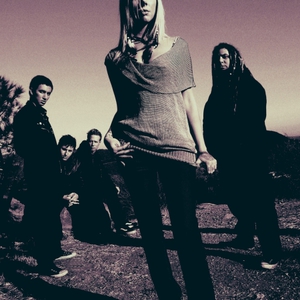 In This Moment is a melodic metalcore band, formed in North Hollywood, Los Angeles, California, United States in 2005. Their first album, entitled Beautiful Tragedy, was released on March 20th, 2007 on Century Media Records. The band's sound falls on the melodic side of the metalcore spectrum, with vocalist Maria Brink utilizing both screams and a good deal of clean, emotive singing, the latter being even more prominent on the band's second album, The Dream, released in 2008. Their third studio album was released on July 2010 named A Star-Crossed Wasteland

Band History
In 2005, singer Maria Brink and guitarist Chris Howorth met through some common friends. After becoming acquainted they found there was much in common between the two and began writing songs. Soon thereafter they enlisted the help of Los Angeles drummer Jeff Fabb. By mid-2005, the lineup included Brink, Howorth, Fabb, guitarist Blake Bunzell, and bassist Josh Newell. The band recorded demos and posted them on Myspace, where they generated a large internet following. During the summer of 2005, Newell departed from the band to focus on his other project, Ketaset, as well as his sound engineering work. A close friend of the band named Pascual Romero (of Tinhorn) took over bass duties for a short time before Jesse Landry was given the position, and the band found its permanent lineup. By the end of the year, In This Moment had generated such a large following due to diligent internet marketing and "do-it-yourself" touring, they sparked an interest from Century Media Records. A worldwide record deal followed. Jesse Landry departed from the band because he wanted to live his true dreams. Fly Planes. Kyle Konkiel Replaced him.

Blood At The Orpheum