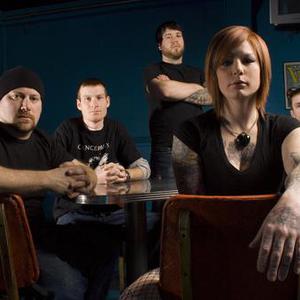 Hailing from Detroit, Walls of Jericho released their highly anticipated 4th CD for Trustkill Records on July 29, 2008. Produced by Ben Schigel (Chimaira/Ringworm), The American Dream follows the mesh of metallic venom and concrete fury of hardcore/punk that the band is known for, 12 solid tracks of highly anticipated hard beating poetic thunder people have come to expect from the band. ?Working on the new CD ended up being a really wonderful experience. We worked really well together, collaborated better than ever, and had a great time.

What more could any of us ask for?? states guitarist Mike Hasty.

After completing ?With Devils Amongst Us All' in 2006, Walls of Jericho hit the road... hard. Along the way, they destroyed city after city on Ozzfest 2006 and Family Values 2006 as well as tours with Stone Sour, Unearth, and Bullet For My Valentine just to name a few. When all that winded down, it was time for a new adventure. In October 2007, Walls of Jericho decided to take some time out to record their new EP. They decided they'd finally do something they haven't had the chance to do: record an acoustic EP. "It's something we've been wanting to do for a long time," said Dustin Schoenhofer, drummer. "You can hear it on pretty much every record the bands ever done. We've always had some kind of acoustic with some kind of metal thing going on. The opportunity came so we decided to do it." To helm this project, the band chose to enlist Corey Taylor of Slipknot/Stone Sour fame to produce the record. After two weeks, the end result was a new EP called ?Redemption' released April 2008.

Seemingly overnight, stylized bands playing strains of melodic hardcore have sailed up the pop charts. But for Walls of Jericho things have played out a bit differently. During the scene's ascension, the band's members have all but shunned the idea of a genre tag or an ?image? and have instead focused their energies on making music that will survive strictly on its musical merits, ?Musically it's really hard for us to change too much. We like what we like and anymore the challenge for us has been to just keep things fresh. We don't want to keep writing the same song, yet we want to be able to hear the song and identify easily what it is that makes us sound like us. The solution for this seemed to be to just ignore the fears and apprehensions and have some fun with the songs. A lot of the feels we have for this record came from direct inspiration for what makes us excited in other bands. We based our success directly on how often we smiled?. says guitarist Hasty.

Most bands in the world can be lumped into one category or another, they are shuffled, redefined, and in that way they begin to lose the qualities that could make them important or meaningful. The greatest bands, the most influential or memorable, are the ones who don't try to fill the role set for them, who don't pursue anything other than the desire to make music, and the need to express that art to an audience. From the start this has been the mind-set of Walls of Jericho.

No One Can Save You From Yourself

With Devils Amongst Us All

All Hail The Dead

A Day And A Thousand Years

The Bound Feed The Gagged