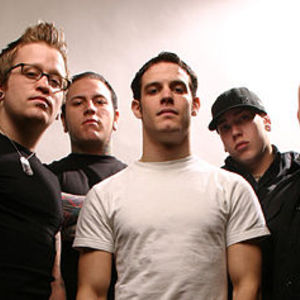 Bury Your Dead (sometimes abbreviated to BYD) is a five-piece metallic hardcore band that hails from Worcester, Massachusetts, United States. Formed in 2001, Bury Your Dead began as a side project of the band Hamartia featuring Brendan "Slim" MacDonald (guitar) and Mark Castillo (Drums). With the metalcore sound of Hamartia growing tiresome to both Slim and Mark, they started writing less technical songs in their free time.

Formed in 2001, Bury Your Dead began as a side project of the band Hamartia featuring Brendan "Slim" MacDonald (guitar) and Mark Castillo (Drums). With the metalcore sound of Hamartia growing tiresome to both Slim and Mark, they started writing less technical songs in their free time. They recruited Steve Kent to play bass, second guitarist Jesse Viens, and Joe Krewko as vocalist and began playing shows in Massachusetts and Connecticut under the name Bury Your Dead. News of their unbridled energy and destructive live show spread immediately around the East Coast hardcore scenes and the band was courted by Alveran/Eulogy Records.

The band recorded and released their debut album titled You Had Me At Hello in March 2002, borrowed a van, then toured in support of it. After several successful tours Bury Your Dead decided to go their separate ways - Mark (drums) moved back to Philadelphia and began touring with Between the Buried and Me, Rich (bass) went back to running his own screen-printing business, and Slim (guitar) began playing guitar in the band Blood Has Been Shed.

After several months had passed, Rich Casey contacted Slim and expressed his interest in reforming Bury Your Dead. They rounded up some of their old lineup, with a few others to fill in, and played some shows before heading down to Florida to play the annual Gainesville Fest. After acquiring vocalist Mat Bruso, they ran into their old drummer, Mark, who was touring with Between the Buried and Me, and they discussed their desire to make Bury Your Dead a serious band again. Mark agreed, and the band did a few short tours as well as appearances at hardcore festivals including Hellfest and Metalfest. Bury Your Dead was back and stronger than ever.

With their lineup in place Bury Your Dead was approached by Victory Records in July 2003 and they signed a deal with the label the following winter. Bury Your Dead spent the next several months touring and when summer approached they holed up in Massachusetts and did nothing but eat, sleep, and breathe the new Bury Your Dead songs, which would comprise their Victory Records debut titled Cover Your Tracks. "The whole writing process this time around was a lot different than the last", said Slim. "We had so many ideas floating around in our heads, so we decided to shut out the outside world and do nothing but get these ideas put together into songs. Literally, for two weeks, we did nothing else but write Cover Your Tracks. They finally entered the studio in June of 2004, choosing to record at Q-Division studios in Somerville, MA with producer Matthew Ellard. "Recording with Matthew was great, he added so much to the record", notes Slim. "It was also nice that Matthew already knew Mark from his days in Between The Buried And Me, so it was a really comfortable feeling in the studio right off the bat."

Aaron "Bubble" Patrick replaced Casey on bass. Produced by Jason Suecof (Trivium, God Forbid), Beauty And The Breakdown appeared in July 2006. Around this time the quintet could be found on artist Derek Hess' nationwide Strhess Tour, alongside acts like Shadows Fall, Poison the Well, and Throwdown.

In January 2007, vocalist Mat Bruso left the band to focus on "more important things like going back to school to become a teacher."
Soon after in March 2007, Michael Crafter, former vocalist for I Killed The Prom Queen and Carpathian, briefly took over vocal duties for part of the "Don't Call It A Comeback Tour", only to leave during the tour to return to Australia due to homesickness.
Following the departure of Crafter, Bury Your Dead quickly appointed Myke Terry, previously of the hardcore band Cassius, to perform vocals.

In 2008 it was announced that Myke had become the permanent vocalist of Bury Your Dead. On March 18, Bury Your Dead released their self titled album. It is the first album to feature Myke Terry on vocals. The album features Alter Bridge guitarist Mark Tremonti, who contributed a guest solo to the track "Year One".

It was announced that Eric Ellis had left the band due to "medical reasons and personality differences." Chris Towning, who has been filling in for several months, has been announced as his replacement.

In 2009, BYD released "It's Nothing Personal." On November 24, 2010 Mark Castillo was announced as the new drummer for Crossfade.

On January 17, 2011, it was announced that Myke Terry was leaving the band to pursue a solo career, as former vocalist Mat Bruso rejoined the band. It was confirmed by Mediaskare Records that Mark Castillo had recorded drums for the new album, but as of their first returning show. Mark was noted to have left the band and Mat announced that Dustin Schoenhofer, previously of Walls of Jericho, has taken over on drums. In addition, Aaron "Bubble" Patrick rejoined the band to replace former bassist Chris Cain, although his absence on the Over The Limit Tour with Evergreen Terrace and For The Fallen Dreams has yet to be explained. Sean Chamilian of Betrayal filled in for him. "Mosh N' Roll" was released on August 2, 2011.

We Are Bury Your Dead (EP)

You Had Me At Hello

Beauty And The Breakdown