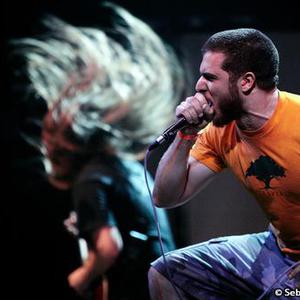 The Red Chord is a band from Revere, Massachusetts, formed in 1999. The band comprises vocalist Guy Kozowyk, guitarist Mike McKenzie, bassist Greg Weeks and drummer Mike Justian. The band gained a fanbase with its 2002's debut album "Fused Together in Revolving Doors". The second album "Clients" was released in 2005 and sold over 30,000 copies in the U.S. With the latest album, 2009's "Fed Through The Teeth Machine", The Red Chord debuted at No. 180 on the Billboard 200 chart.

Since its formation, The Red Chord has released four studio albums, toured in North America, Europe, Japan and eventually became a pioneering band of the "deathcore" genre.

The majority of The Red Chord's music is written by McKenzie and to a lesser degree by Weeks. The band's "grindcore style of death metal" or "death/grind" incorporates also elements of metalcore and hardcore punk and is typically experimental. The band helped popularize the "deathcore" genre. The Red Chord typically uses frequent tempo changes, technically proficient instrumental approach and emphasizes the element of groove in their music. The vocal style of Kozowyk combines death metal's guttural growl with metalcore-style screaming, uses occasional spoken word and is rather decipherable. As a vocal influence, Kozowyk points out Frank Mullen from Suffocation; Black Sabbath as one of his musical influences and Faith No More as a lyrical inspiration. PopMatters states that "The Red Chord has become renowned for its sense of humor" exemplified by the video "Stache Attack".

Fed Through The Teeth Machine

Fused Together In Revolving Doors